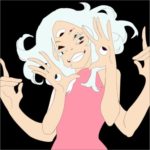 An account to humor my tendancy to make a bunch of random characters, so… Yep.

~~
Kirithe Fen’yeran – A member of the crew of the Heiress, an enchanted ship. A smaller version of the Sea Strider (captained by Jonotan De Fer), the Heiress is able to travel to anywhere- any reality, any world, etc- so long as there is another body of water. The Heiress has a crew of ten people, all of whom are from Braiken.
~
Aven Ryth – An ex-sailor (yes I’m in an ocean phase) who left to become a Div.
~
Duality/the Twins – Some sort of symbol of duality, one entity split between two bodies. They each have individual names, as well as a communal title… Almost all of which were forgotten by everyone but her/them in her/their time in the MadHouse. She/they was/were one/some of the first resident(s), and has been so affected by the plane that she/they can communicate with the entity that is the pocket reality.
~
Marie Lawrence – She has an agreement with a few other-dimensional beings, from whom she draws the majority of her power. She is also a grim shifter (the common term for her strain of shapeshifter, who has a… less than pleasant way of changing form)
~
Sareiah Lyn – A noble from a crumbling reality. She has been allowed to give many a title to the people of her family’s domain, but her mother and aunts never hear anything she has to say when it comes to the people there. She is willing to begin a new life here, but… it is difficult leaving her home behind.
~
Benoni Mort – He’s… Quiet. Shy. Has a… very rough past.
~
Nil’thren – A wyldkin of flame and bone. Her nature and being fluxuates somewhat, with the amount of Lyrime essence running through her veins. But that is the existence of a wyldkin. The beasts have it worse.
~
Veduta tal-Mewt (Veyda) – She is a strange girl with little memory of her past, and who sees  death at various times from various realities, from the view of the killer, the dying, or neither. This has… taken a toll on her mental state.
~
Matilda Nyf – One of the few Full-blooded Whelm left, she’s been through more than she should have been allowed, but she is a survivor.
~
Jean Kirien – He’s not sure what he is, but he’s trying to make the best he can of it.
~
Syl Irileth – A false Myr made by an overly bored warlock. Or… Syl thinks he’s a warlock. Ve’s not anywhere near a perfect replication, which shows in the symmetrical irises and the white patterns along vis form. Ve tries to be kind and respectful, when ve can… vis creator’s demands sometimes leading to exceptions. And… Syl’s own needs, as ve is primarily a self-replicating magic, and ve does not grow as fast as ve burns magic by simply existing. Using magic only furthers the situation, but ve can take magic from others. Although… Syl feels like a parasite and loathes doing so, nearly starving verself the majority of the time.

Ruthellian Ithid (Ruth) – Third mate of the crew of the Sea Strider, a ship that can travel to any existing body of water, whether or not it is i the same universe. She’s a demigoddess of storms at sea, but her element is shifting to storms in general… but she is still very much restricted by mortality. She’s somewhat timid, and both appreciates time alone and silence- or, at the very least, the absence of the sounds of people.

Robin Vadas – She’s a nosy little sprite. The truth of each part of that statement varies from moment to moment… but hey. She’s only in her thirties, and still figuring out who she is. So what else would you expect?

Tes Renolt – of the Roaming Myr, Tes is one of the keepers of the Lakes of the Fallen. She’s young, especially for a Myr, but she knows the culture well, especially considering the fact that she grew up tribeless.

Nirek– He’s a… something. A spirit that possessed something and got stuck. So… Now he’s… whatever that is, now. He’s got sticky fingers, though… Which is a bit of trouble, as he isn’t always the most stealthy of people.

Sairena Locke– An ex-mercenary. She used to be a member of the Wandering, but when she was given a job for her closest friend, she left. By slicing off a chunk of her face. It’s where she had gotten her brand- VII in her left cheek. Rei healed her cheek back into place, of course… She’s the one Sairena left to save, after all. Anyways, Lucky’s sixteen and cynical.

Elena Wyren – She is Tikaet’s memories reborn into a child of the ashes of a broken world. Of course, Elena doesn’t generally give half of a shit about the goddess she came from. Or any of the other pasts that seem to be rattling around in her head. She mainly just wants to stay alive. Not that her morals don’t get in the way sometimes.

Reyna Sorg– She’s a mutt, born of a half-Sonic(Not the hedgehog) and a bored nephilim. Her mother, the nephilim, tried to raise her for a little while, but she was stolen by a spiteful ex-goddess before she was all but drop-kicked into a pocket reality. She was raised by a species that should have died off centuries ago- a species that everyone else thought was long dead- and when she stopped growing, they banished her. She can step between realities and dimensions, but now she couldn’t go back, even if she tried. So… Here she is.

Kirithe– Pink hair, oceanic eyes, and she’s beginning to develop a tan, ever slowly. She’s 5’6, and has some muscle on her.

Aven– She’s 5’11”, strong (especially for her appearance), and pale with nearly white hair, striking eyes that resemble the ocean, and dozens of scars, the most noticeable (at the mo) being the one on her neck. One curved line goes from below one ear to the middle of her throat then to the other ear, and a second goes from her jaw to her collarbone, forming a sort of trident shape.

Marie– 5’3″, Short red hair, blue eyes, fair complexion, a few faint scars on her hands and forearms from a few blood pacts. Okay, many blood pacts. But hey. A girl has her wants.

Nil’thren– Height varies, but almost always slender and slightly muscular, deep tan, various striped markings, warm brown hair that matches color with her feline ears and wolfish tail. On each section of her arms and legs, there is a glowing golden pattern of two lines with circles forming a ring around her arm between them. Gold eyes and piercings in her ears

Veduta tal-Mewt (Veyda)- A total of eleven eyes, four arms, four legs, and some tattoos, which have changed from time to time. Several scars, pale skin, star-white hair, serrated teeth, and nearly black irises (each eye is a different color, they change color sometimes), during the spring and summer she has little leafy sprouts growing from the top of her head, 5’3″

Mati– deep grey skin with some sparse light grey to white freckles, neon, glowing scars run through her skin, glowing neon eyes, the underside of her short black hair glows with a similar hue to her head’s blood color at the time, although the colors of her scars, hair, and eyes is constantly shifting and dancing between colors and hues and such.

Jean– Teenaged, muddy brown hair with a white stripe that he’s grown out into a mowhawk, white wings, tail covered in a thick layer of short white hair(as short as the brown hair on his head), tattoos on neck and arms and torso, pale brown to grey eyes, 5’2.75″

Syl – Five foot, even. White hair, violet eyes with a fuschia sheen, warm skin lined somewhat with white lines from the neck down, the thickest of which begins beneath vis hair and follows the spine, the rest branching out from it. Vis blood is pale, iridescent, and… more simply, pearlescent.

Robin– 5’2″, pale, skinny, and with pink flushes over her form, showing freckles, a crescent on her forehead(which she emphasizes with makeup), faint patterns along her back, etc. Her irises have three hues- a pale blue center ring, a blood red primary ring, and a black outermost ring. She also has a scar running from her bottom lip down, fading away around her chin. Her hair is long and straight, and it’s sort of a grey-platinum blonde hue, and soft as hell.

Tes- Her hair is curly and blonde and appears a little longer than shoulder-length. She is 5’2”, and her left eye is the orange-pink hues of the sunset while the right is midnight indigo. Her blood is a pearlescent Black, and she’s cooler than most humans. Temperature-wise.

Nirek– He’s paper-white, and everything save liquids beneath his skin is teal. His blood and tears and saliva are a runny, translucent indigo. He stands at 4’11”.

Sairena– Coal-colored eyes, pale blonde hair, a tan (her left cheek is paler than the rest with a bronze upside down delta tattooed into it), she’s muscled and covered in scars, her left leg is the same pale hue as the respective cheek, her left eye and right leg from the knee down and her left arm from the elbow down are robotic but you can’t tell unless you look close… there’s also what resembles a black implanted hearing aid or earpiece in her right ear), she is 5’4”

Elena- golden hair that fades to a sunset pink at the tips, pale skin that seems to turn into a sunset on her face, hands and feet, fading from pale peach to golden-orange, to sunset pink, and to the indigo of dusk, and her shoulders, hips, elbows and knees all darken slightly, almost as if they were bruised. At the base of her throat, there appears to be a small disc of some sort that glows with a fire-like golden light. Around the circle is a white line, very akin to the white lines that litter her form in various geometric shapes (several lines zigzagging over each other under her collarbone, three lines circling her throat, a sun-like symbol on her forehead and circles on her chin, elbows, knees…), her scileras are indigo, and her pupils/irises are the same glowing pale-centered gold as the disc above her collarbone, she stands at 5’4″

Reyna– Pale, with sharp features and gem-like blue-teal eyes. Her hair is wavy and midnight black(faint tint of blue). She, like her father, can conjure Marks(essentially moveable tattoos) to her skin, but she almost always keeps a series of them to her face, which vaguely give the image of a skull, while not detracting from her appearance. She is pretty and proud of it. Reyna is slim, but toned, and is 5’11”.