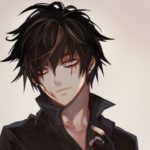 Razael. Last name unknown. He is a Nephalem.

Razael is six foot four inches tall, has tanned skin, and shaggy black hair with a little brown mixed in. His eyes are two different colors, the right one being Amber, and the left being a dull silver. He has three piercings, two in his left ear, and one on his right ear. He has two scars over his left eye and one over his right. He also has one shaped like a lightning bolt on his right cheek. His attire consists of a black long sleeve button up shirt, with a red cloth wrapped around his left bicep, black finger-less gloves, baggy black jeans, and black boots.