Titles: Champion of the Lustirian Empire

Backstory:  Rebecca’s first memories were of chains.  Born into slavery from a human mother and an unknown father, the girl was quickly and brutally taught her place by her masters each day.  Though she bore the appearance of her mother, with light blue eyes, blonde hair, and fair skin, Rebecca began to exhibit strange powers from a young age that made her stand out from the rest of the slaves.  The ability to alter her body in small ways with just a thought and a flex of will, giving her immense strength by swelling muscles or great speed with just a slight change to her tendons and bone structure.  These abilities and their early development saved the girl from the most common use of a female slave, but it also put her onto a far more dangerous path.

After only a few months of practice with her newfound abilities, Rebecca was entered into a gladiatorial slave fighting match where she was quick to show others not to underestimate her due to her size after beating an experienced male fighter to death through sheer strength and speed.  It was here she gained her first scar and the name that would follow her throughout her fighting career.  Becky Boulderfist.

Years passed and the fights grew ever more exhilarating for Rebecca, the girl growing into a woman as she learned to enjoy and even take pleasure and thrills from the battles.  Each scar she bore on her pale skin was worn with pride at the remembrance of a great fight, and she seemed to heal from even the gravest of wounds after only a night’s rest.

One day, Rebecca’s contract was purchased by a group of adventurer’s who had seen her fight.  They freed her then and there, and offered her a place in their group for the chance to fight truly powerful foes and monstrous creatures.  The fighter agreed before they had even finished their proposal, going on to spend several years with the group and taking down all manner of creatures with her hardened fists.

During their most recent adventure, Rebecca was swallowed up by a planar rift and sent across the multiverse, where she ended up on Hellifyno.  With only her fists, clothes, a fighter’s spirit, and a half full bag of holding, she faced forward and strode out to learn more about this strange place.  And maybe find some fun along the way.

After a few weeks of travel, Rebecca had heard of a fighting tournament being held in the Lustirian Empire.  Eager to test herself and get a bit of prize money too, she signed up for the fighting and battled her way to the finals.  No enemy could match her brutal style and powerful abilities, and she won the tournament handily.  This earned her the title of Champion and a chance to fight King Daniel Mcknight himself, the ruler of the Empire, in an exhibition match.  The fight was difficult, pushing both of them and testing their limits, but in the end it was the King who had won and proven his strength to her.

Soon after the celebration of her wins in the competition, Rebecca set off on a quest from the King, involving the use of her title to act as his agent to far settlements in the Empire.  The most recent issue she was to solve was a revellious pack of lycans that refused to follow the laws of the Empire despite the King welcoming them into his protection.  Confronting the creatures directly after many days of travel, the scarred fighter proved too much for them and they slunk away to regain their strength.  But Rebecca had not come from the fight without consequence.

The virus in the lycan’s saliva had invaded her body from a bite wound and spread through her rapidly, changing her from within.  And though it would normally have turned a human into a similar wolf-like creature as the rest of the lycans, it reacted strangely to her non-human blood. 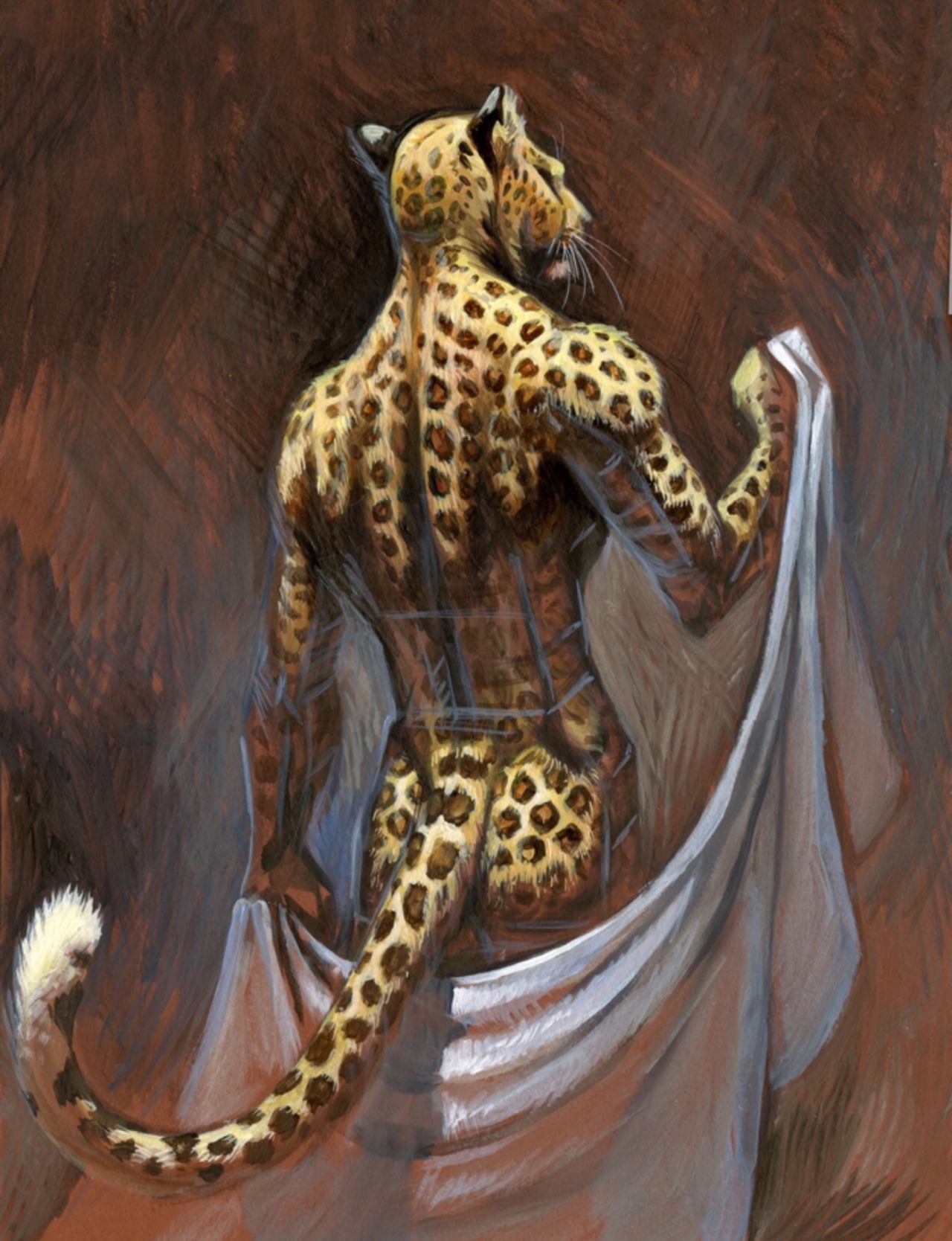 Days later, under the light of the full moon, Rebecca changed for the first time, into a massive bipedal leopard woman.  She found that her strength and speed were increased immensely in this form, though far more heavily skewed toward speed.  Her senses of smell and hearing had similarly been enhanced, and she could see through night as if it were daylight.  The ability to slightly alter her body had not left her either, leaving Rebecca capable of shifting the density of her newfound claws and teeth, enhancing her muscles for strength or speed, or reinforcing her now much more flexible skeleton to give or take blows.  The only downsides to the form seemed to be how deeply it had seeped into her mind, ingraining predatory instincts and some odd few feline traits into the pit fighter.  It would take time to master the form to its full potential.

Rebecca stands at a fairly tall height of six feet with a defined and muscled body, bearing numerous crisscrossing scars over much of it.  Burns, cuts, claw marks, and more can be found carved into her skin.  Her light blonde hair is roughly cut short as if by a dagger, and her eyes are a light blue though the  left one is much lighter due to a fireball injury that half blinded the eye.  Over each shoulder and down across the top of her breasts, Rebecca has several arrow tattoos.

Most commonly she wears a simple cloth breast binding, cloth hand wraps for her wrists and knuckles, and either leather or rough-spun cloth pants.  Sturdy leather boots cover her feet, unless she is in a fighting ring where she prefers to go barefoot. 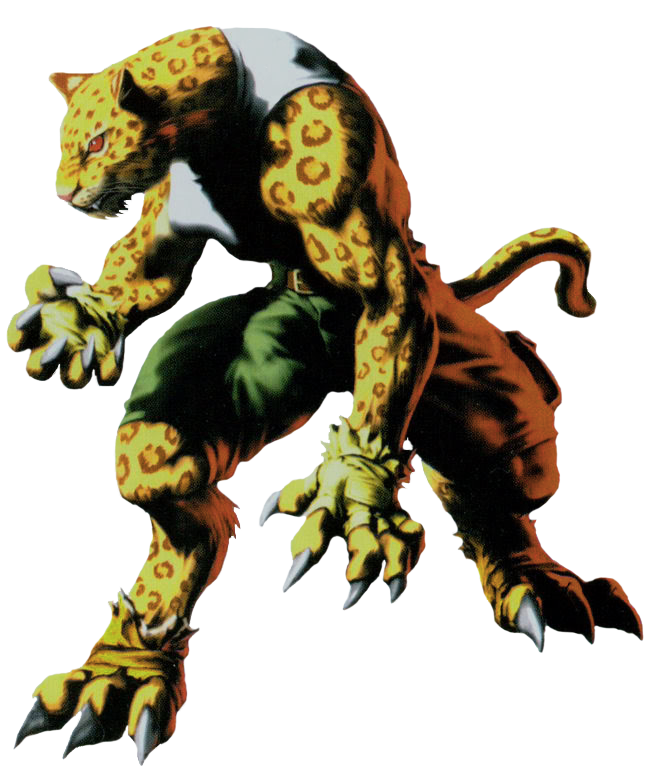 In Leopard form, Rebecca grows to an even taller eight feet, though her change in posture leaves her at just above eye level for her more human form.  Her legs become digitigrade and a tail grows from her spine, while her facial features shift to a feline shape.  Spotted orange-yellow fur spreads across her body and her hair seems to be absorbed by the transformation, leaving her head topped only by two triangular ears.  The fighter becomes much more muscular through the change, keeping consistent with her new height and feline traits, and her eyes become a blood red with a predatory gleam.

20lbs of hardtack and trail rations

I can change far more than anyone could guess