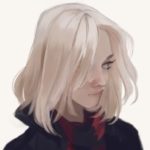 Naven Volturen is a Div, and she actively worships all of the dead beings that she has marked herself for. When she was reborn, it was with paper-white skin, hair like snow, and birthmarks in place of her scars. And she remembers her previous lives… although she remembers it as one would a book, or a movie. All of her abilities stayed with her, but she has to exercise most of them to get them back to their previous caliber. Other, more passive abilities, have grown with age. For example, she chooses her physical age, meaning she can drift forward or back however far she likes. She does not need to eat, but she still buys meals and cuts them and separates them for offerings. She practices holy days of sorts- on the days of the dead, she refuses to be seen, and she just spends the day in avid worship. Most Div think she is strange or crazy for so avidly subjugating herself to the dead, but she is the most powerful Div out there, having been reborn several times now. This is her fourth life, and she was one of the earliest Div, when they were prioritizing continuation of worship over mimicry or theft. Which is, in her eyes, what most Div do now. She won’t call them out on it, however… let them follow whatever disrespectful ways they please, she sees no reason to scorn others for what they do. Not if she doesn’t want them to do the same to her. Do not sink to the level of those who lose your trust, or whatever her first iteration has said. Basically… golden rule. If you don’t want someone to be an ass to you, don’t be an ass to them. And if they are anyways, don’t stoop to their level.

Anyone, should they get close enough.

Pale skin, grey eyes, white hair, dozens of birthmarks in the shapes of various symbols and designs and such.