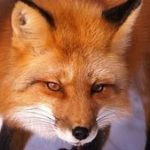 ‘Animutat’, coming from the words ‘Animal’ and ‘Mutate’ is an animal, with the ability to change to any other animal of the same genus [Currently Vulpes] It has the ability to change genus, though that Is only bi-monthly, as a result, it is currently stuck as a form of Fox for the next two months, obviously, it has no exact date, though it takes 2 months on average.  The ‘animal-shifter’ is currently unnamed. The unnamed creature is Female.

reddish-brown coat above, with white underparts except for a black tipped nose and lower legs. I also have a large, very noticeable, bushy tail that is white tipped