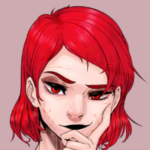 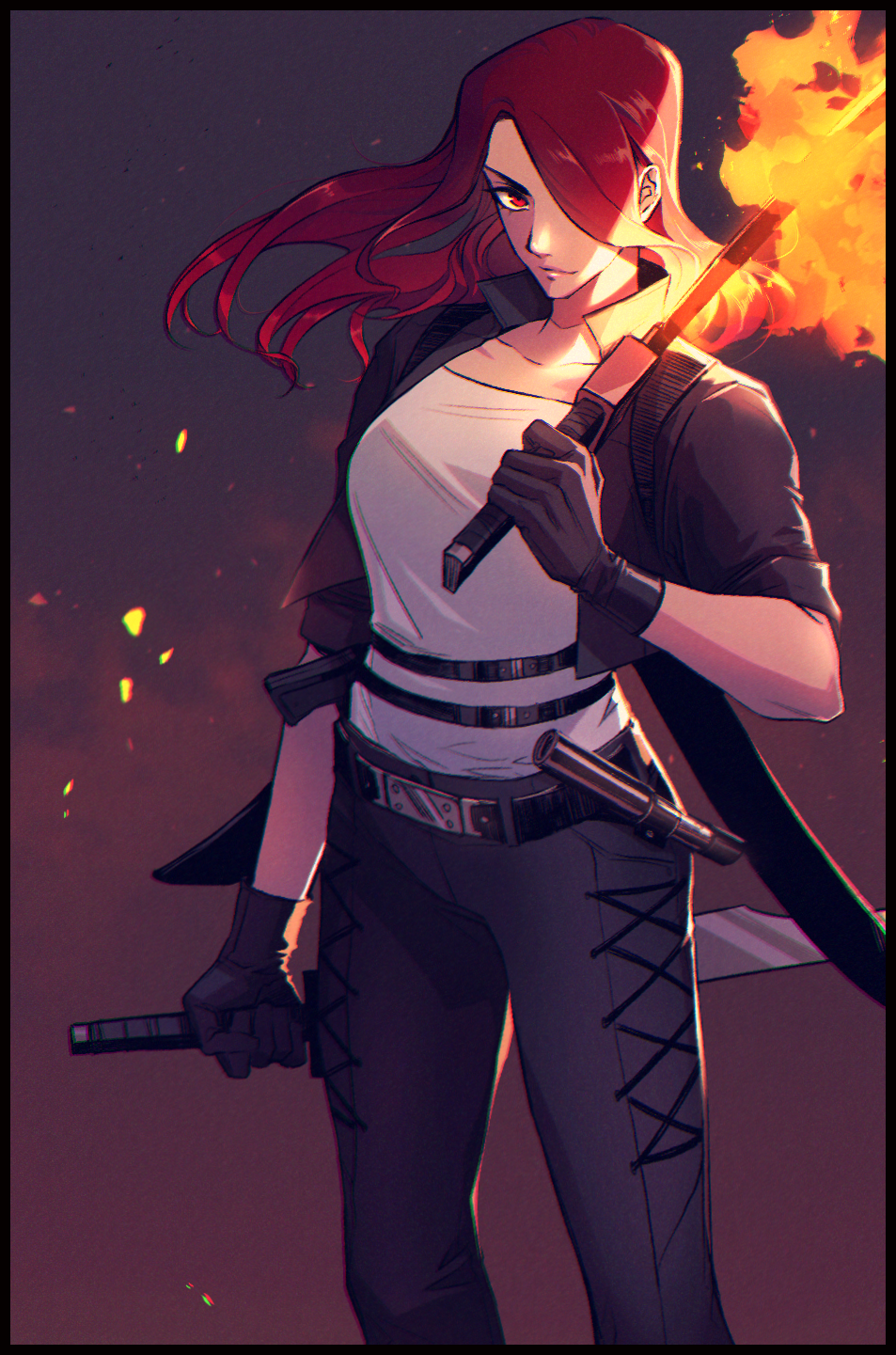 Elesis is a built woman who takes great pride in her well-trained body and curvaceous shape. One’s eyes may immediately fall upon her dark, long, wavy, red hair falling to the middle of her back, though cut shorter at times, that mimics the intensity of roses in richness before taking note of her blood red eyes that always seem focused, except, for whenever she’s relaxed which then has her eyes seeming brighter, like a perfect cherry, and less menacing. Her face is oval-shaped, but her chin is slightly pointed making her face seem somewhat heart-shaped as well depending on how one’s eyes train on her. Her jawline is slim with her cheeks being slightly hollow under her cheekbones giving her a more serious model look, though, some may just say she has cute dimples. (I would not recommend calling her cute). She dons a medium-sized, slightly pointed nose.  Her lips are thin, yet, they are a nice pinkish color. Elesis has the face to easily become a model with barely any freckles despite her being a ginger with pale skin, but her time fighting and living in constant warfare has scarred her in rather startling ways. Though, she normally wears a serious expression making others quite wary of her presence, but once an individual gets to know her, they quickly get to see her smiles and wilder facial expressions as she’s usually the type of gal to wear her confidence.

Said earlier, Elesis is a built woman with a curvaceous shape standing at a height of 5 feet and 8 inches. She has a maroon cream skin tone. Though, depending on if she spends long times outside, her skin can appear to have more color as a sort of tan. She wears a D cup size bra, but she’s more on the smaller side of the size chart. Moving down to her stomach area, one will notice her 25-inch toned midsection. Due to many hours, days, and years of working out, Elesis has developed quite the defined body with a nice six pack. Though, her abs are not chiseled or carved as some men, like to have theirs, and are more a faint imprint on her stomach showing how balanced her workout is. Her shoulders are slightly bold and plump, and her arms are sexually toned ending with small, yet slightly rough, strong manicured hands and fingers. Now, her hips are decently sized, 35 inches, from the work she’s done training her thighs and such. Yes, one may say she has a strong posterior, but be warned and careful of compliments. Elyss has a tendency to flex her strength if she deems necessary, and her scarred body knows just how to harm a person accurately. 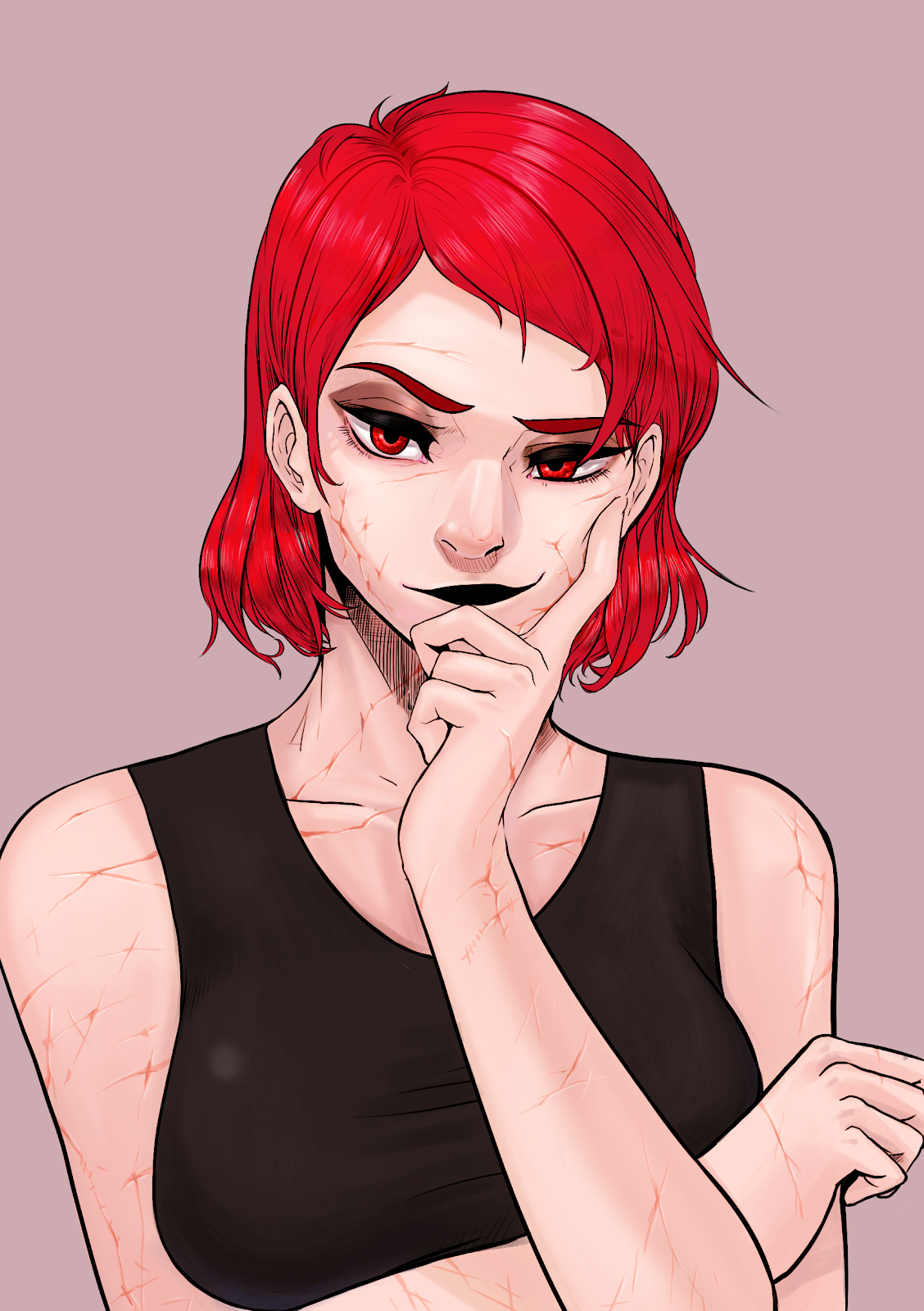 ·        Elesis is a woman who carries about herself a certain air. The first thing a person may notice of her is a tact for helping others. From the way she looks one would think her a bad girl who’d rather punk someone out of their money than give hers to them. Though, they will find out quickly that she is quite a sweetheart when given the time to learn of. That’s when you’ll get to see her more outspoken personality. She’s quite the loud individual who enjoys fun times with people she perceives as friends or anyone who doesn’t show themselves off as bastards to her.

·        When it comes down to deals, bets, or simple arrangements, Elesis is a woman of her word. She says she’ll do it and she means she’ll do it even if it proves challenging for her. That just means she’ll have to do the best she can with what she can. Though, she herself has a limit to how trusting of others she allows herself to be. With the way she lives her life, she doesn’t want to let anyone too close without knowing that they’re someone she can rely on. And, once you have her trust, she becomes one of the best friends a person can have. Be sure not to somehow ruin it.

·        A confident individual, Elesis puts a lot of time into making sure she’s fit and trained. After long years of practicing controlling her magic and body, she feels she can take on any situation if she tries hard enough. Therefore, there is always this air about her that makes one believe she has everything together. It’s also why she always seems optimistic in all situations she finds herself in believing she can somehow make a way even if there seems to be no way. She’s not one to easily give.

·        Like every person, she has her faults. Where she is confident, she is also quite stubborn, believing in herself and her companion’s skills to the point that it peeves her when people tell her that something she believes is possible isn’t. It goes beyond just an overconfidence in skills as well. Even in everyday life, she has her quirks about her that others may dislike and wish for her to change, but being her, she will show resistance if she finds the idea of changing it ridiculous and unnecessary. She is always ready to argue her point and backing down is the last thing on her mind.

·         Some may call her immature at times for the way she is. Maybe she just enjoys having a good time far more than she should, but she believes that a joke here or there, even in serious situations, does no harm. Though, many may not feel that way. Then, it worsens the more she drinks as she loses what seriousness she has to the bottle becoming quite the manic comedian.

·        Moving on to a bit more of a serious issue that Elesis’ control of wanes on a daily basis is her emotional issue. Having powers directly connected to how she feels means that she must focus and not lose control of herself while wielding her flames. Though, that is difficult due to being born with her mother’s rage; an anger that is not simply conquered by strong will and apologies at times. This rage can send her into a frenzy where she loses control abandoning any morals or care as she becomes violently destructive of her surroundings; more destructive than she already is, but a determined person can pull her out of her angry stupor with enough patience.

If you have something to fight for, then fight for it.