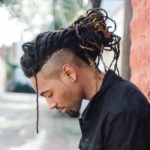 active 9 months, 2 weeks ago
Base

I am a mountain of a man, who's never known defeat. I come from a far planet, called Eden, and my weapon is the black substance my home calls Nyxia. | I am a child, who lost his big brother on a long road while traveling, and found Centurion to take me home.

I was raised to be watchful, hold my tongue, yet never stand down. I grew up mastering the substance of Nyxia, how to form it into anything with just a thought, and how to use it to defend myself and others. I escaped my planet, just before its two moons collide and destroyed my home itself. I cat my reach into the stars, to find the universe had the same idea, and found myself here, where it is my goal to become one of the people, and help defend it from anything. | I am now 14 years old, and my brother died when I was 13. On my 13th birthday. So yeah, that’s on my conscious  now, and I need to learn to cope, quickly. I can control time for a small length, stopping, taking back, and forwarding as I please, rapidly if need be, but no longer than 5 minutes at a time.  I recruited a quiet man from a tavern to help me return home with the little amounts of gold I had, and I buried my slingshot with my brother, the only thing I could give him. When I am older, it’ll be hell for those five men, whomever they are.

Kind of tall, by human standards, 5′ 11″ at only 14 years old. Light skin. I wear an Adidas outfit, that used to be my brother’s, and it’s magical so it never looks old and dirty. Rips fix themselves.

The clothes on my back, that’s it.

I have none. I am just eerily quiet.

What I saw that day my brother died.

We are all in the same boat. | There is no such thing as disrespect, unless retaliation follows pursuit.