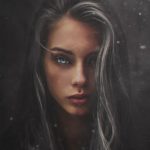 Aishe is a universal nomad of Romani descent. Her will is strong, her story is vast. Come sit, have a drink and listen to a song or two?

Aishe is a galactic vagabond. She has met and engaged with many species and cultures and with it, adapted and enhanced her equipment with magical artifacts and future tech.

Aishe has the power to…well take power. She can absorb powers, nullify their effect in most cases. It makes it very hard to hurt her magically, but also very hard to heal her at the same time.

If hit with a strong enough magical spell/ward or charm nullification is less probable and in turn she becomes a reflector turning the effect back outward. This can prove to be a singular counter back on an enemy or as drastic as free fire area effect on those she is with as well as against. When focused she can channel this ability and alter it’s effect as long as it is in the same school of magic (nature, destructive, transmutation, clarity etc.)

Olive skin, grey eyes, appears to be in her twenties but has ash grey hair. Wears mostly black skirts and tops with sandals. Adorned with silver bangles around the wrist and ankles constantly giving of soft chimes and jingles when she moves. Multi pattern scarves of red and metallic colors around her hip.

A violin, made of black wood, with sparkling silver strings. When played the sound seems to be amplified without an electrical hookup to any outside speakers.

What appears to be an aged multi-tool

In the Roma way.