SPOILERS CONTAINED. PROCEED AT YOUR OWN VOLITION.

• Ruby Rose is a canon character from the webseries RWBY and DOES NOT belong to me, but to the amazing mind of Monty Oum and Rooster Teeth.

• The artwork is not mine, but are from an artist on Twitter.

After the time-skip following the Fall of Beacon, her new design sports a white high-neck décolletage blouse with brown studded wristbands on the arms. Her outfit retains the use of a black skirt with red tulle underneath, somewhat similar to her original outfit, but her waist cincher has been replaced with an overbust corset with red strip holding it in place. A black belt bordered in red holds the magnetic clip for Crescent Rose and its ammunition. She also has brown straps on her blouse that allow her to wear a small brown backpack.

In lieu of her usual full black stockings, Ruby wears thigh-high stockings reaching to a few inches below the hem of her skirt, decorated by an image of a long-stemmed rose. Her red-soled black boots contain four straps and buckles apiece. Her cloak has a singular clip on the right shoulder in the shape of her emblem, replacing the cross-shaped clips from her original attire. Both the cloak and the stockings show tears from hard wear. Her hair has also grown slightly longer, maintaining the color gradation from black at the roots to red at the tips.

Sometime after arriving in Atlas, Ruby has a new outfit that is similar to her Post-Timeskip outfit, keeping her waist cincher worn over a pale blouse, with her chest no longer exposed and her red cape no longer torn. She wears a short, dark red skirt that is split at the side with a small brown belted strap across the gap. Underneath the skirt is a pair of red shorts. On her arms, she wears black bracers with brown belts around the wrist as well as black fingerless gloves. Around her waist, she now has a brown belt with several bullets and a buckle of her emblem on it. She wears thigh-high steel-toe boots with brown belts around the thighs and no laces. Her hair has also become spikier.

Personality (Include SPOILERS Of Volume 6-7) 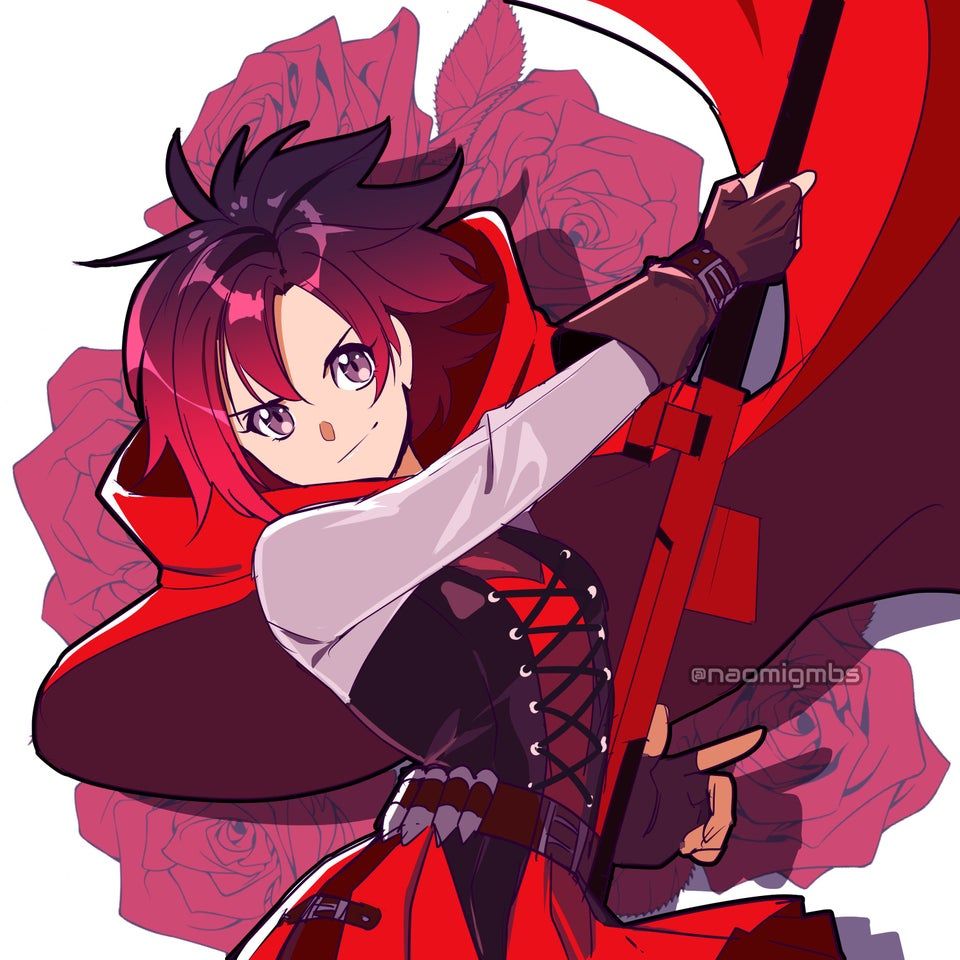 Ever since she was little, Ruby has had a romanticized view of the Huntsman profession. She is quick to reveal she wanted to become a Huntress in order to be like the great heroes in fairy tales, and she has described being one as far more “romantic” than being a police officer. Her mentality is described as “I don’t have time for my emotions. I’ve gotta make sure that everybody else is okay.” Lindsay Jones claims Ruby’s mentality is “selfless, but that means she’s not dealing with her own issues. Compartmentalizing and internalizing her grief is what might eventually destroy her.” She has also shown a distinct lack of ability picking up social cues due to being a very open and honest person.

In combat or dangerous situations, she is shown to be quite impulsive and battle eager, such as when she attacks a Death Stalker upon seeing it before learning of its high resistance to bullets and blades. This trait contrasts with her adaptability, for she is quite capable of forming attack plans with others in order to take down stronger foes. After her discussion with Ozpin in “The Badge and The Burden, Pt.2”, Ruby begins to take her role as leader of Team RWBY seriously. However, future instances of recklessness are when none of her teammates are near her, such as in the “Battle of Beacon” when she goes alone to engage Roman and Neopolitan, who both outnumbered and outmatched her.

In Volume 6, Ruby further develops as a leader whenever she and her friends find themselves in trouble. This is evident when she directs the group when they are attacked on the Argus Limited and when she stands up to Qrow after he turns down Jaune’s proposed idea of stealing a military airship to get to Atlas. Ruby’s leadership starts after Ozpin loses everyone’s trust and her uncle falls into depression, leaving her to take charge of the group. 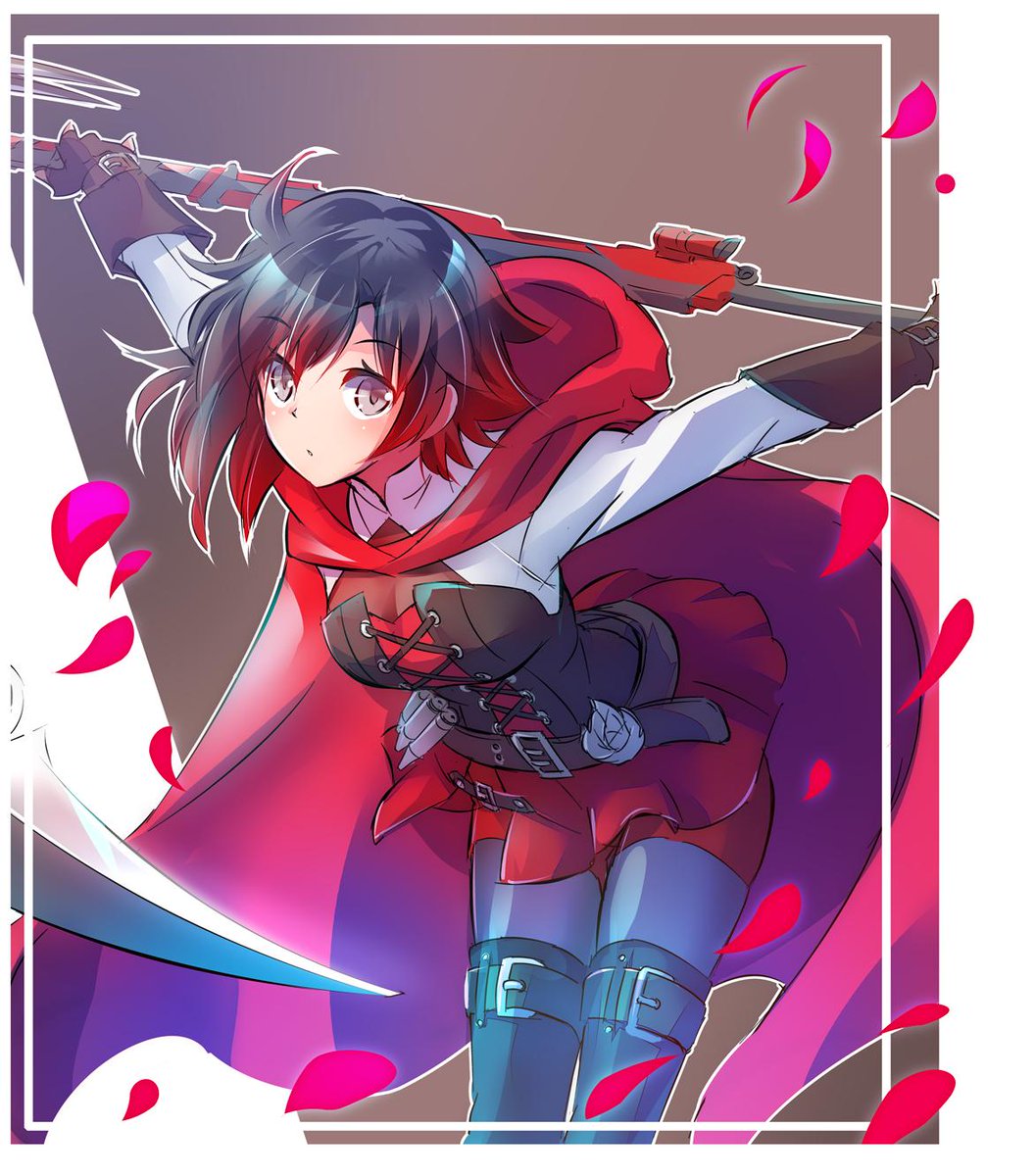 Ruby is self-admittedly obsessed when it comes to weapons, which shows in her complex design and craftsmanship of Crescent Rose, her High-Caliber Sniper-Scythe which she designed herself at Signal, as well as her eye for detail when observing other people’s weapons and tools. This weapon can transform between a scythe and a sniper rifle and can fire Dust rounds in either form with massive force, as demonstrated in the “Red” Trailer when she used a Gravity Dust magazine. Rather than compensate for it, Ruby harnesses the recoil to enhance her mobility in combat, firing shots to propel herself short distances, simultaneously attacking and evading an opponent. It is also capable of using Fire and Lightning Dust. Crescent Rose’s blade can also bend back slightly, though this is only shown when Ruby rushes forward, and the tip of the scythe hits something. Ruby takes advantage of this spear-like form to pin a Nuckelavee’s arm to the ground.

Ruby’s Semblance, Petal Burst, allows her to dash with an inhuman speed in whatever direction she chooses, often leaving trails of rose petals in her wake. This happens so fast she sometimes teleports. However, this is, of course, at the cost of Aura so Ruby can’t rely on it for very long. She has displayed the ability to use this Semblance midair, as well as to create powerful whirlwinds that can suck in and knock away objects and foes caught by it.

Through her mother, Summer, Ruby comes from a line of legendary warriors who possessed powerful abilities related to their Silver Eyes, said to be an extremely rare trait. Upon seeing Pyrrha Nikos die in “End of the Beginning”, Ruby accidentally uses this power in her grief and petrifies the Wyvern. However, she has no memory of doing this other than her head hurting. Later in the episode, Qrow describes a fairy tale about warriors with Silver Eyes who are so powerful that even the Grimm fear them.