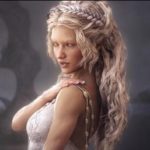 Her most recent form stands at just under 6ft, with pale skin and fair blonde hair. Her facial features would trick you into thinking she is an elf.

She usually likes to wear white, silver or cream colours. She prefers dresses and loose fitting, flowing clothes over anything else.

Born to a changeling mother in a small settlement surrounded by humans. She learnt to mimic the human form from an early age. Over time she learnt that life could be made easier if she was regarded as beautiful. Slowly she morphed her female human form into a more desirable package. She pushed her beauty to the point where it attracted unwanted attention. Her young age and naive nature led her to fall prey to the males around her. From then on she has learnt to be stronger and firmer with her choices in life.

She continued to live in the same area that she’d been born in. Spending a lot of time in the woods and in solitude away from those who desired her and those who had become jealous of the looks she’d so carefully crafted for herself.

It was in her beloved woods that she came across a shimmering orb. A young Yarx felt drawn to it and compelled to touch it. She remembers little of what happened next, only that she awoke in a new forest, different trees, smells and surroundings. After a few hours she happened upon a road, following it for the rest of the afternoon. She didn’t realise it at the time but she’d been deposited on Hellifyno, just outside the city of Consequence. She has resided there ever since, rarely venturing out of the city boundaries.

Recently she has taken on the name of Ismi, using it as a first name to supplement the name given by her mother.

my own, to be unknown is to be unconquerable.