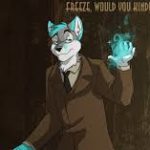 My journey to Rapture was my second exodus. In 1919, I fled a country that had traded in despotism for insanity.
ANDREW RYAN
Andrew Ryan, born in a village near Minsk[7] in the Russian Empire (modern-day Belarus), grew up in a Jewish-Belarusian family[8] during the time when the Tsar still held autocratic rule over that country. Minsk was on the front lines in the First World War. In 1917 he witnessed the Russian Revolution, which eventually brought the Bolsheviks into power[9] and also destroyed Ryan’s family business.[10] Ryan also watched as the Bolshevik Red Guard killed his aunt and uncle during a purge for associating with Ryan’s father and others who opposed the Communist regime before fleeing with his father to Constantinople. Ryan’s experiences under Soviet rule led him to his personal philosophy: the modern world was created by great men who strove to make their own way. Any time “Parasites” gained control of such a world, they destroyed it. As a boy in 1919, he fled to America, believing it to be a place where a great man could prosper, just before Belarus and multiple other countries such as Ukraine and Russia formed to create the Soviet Union in 1922. He anglicized his name to Andrew Ryan.[11]
Life in America
For a time, Ryan was devoted to his adopted country, grateful for the wealth and fame it awarded his intellect and determination after he managed to get rich by fortunately striking oil on his property and investing wisely afterwards. However, the state-run social programs created in the 1930s increasingly tested that devotion. His experiences in the “worker’s paradise” made Ryan despise the ideals of Socialism and Collectivism, as he believed that those who benefited undeservedly from others were “Parasites” (e.g. he considered Roosevelt and his “New Dealers” to be “spoon-feeding” Americans on the “Bolshevik Poison”).[11] In Ryan’s philosophy, one could only own what one earned—Ryan himself once owned a large forest as a personal retreat, one that many groups envied (one group told him that it “belonged to God,” demanding that he establish a public park there). When the government attempted to nationalize it as parkland, Ryan’s response was to burn it to the ground to deny it to the “Parasites”.[12]

The final straw for Ryan was the destruction of Hiroshima with the atomic bomb.[13] In his eyes, the bomb was the ultimate corruption of his ideals—science and determination harnessed for destruction, creating a weapon that gave the “parasites” the ability to destroy anything that they could not seize.
Creation of Rapture 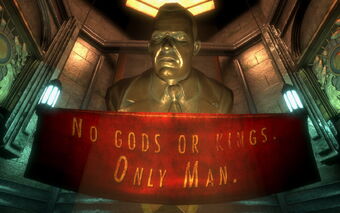 A bust of Andrew Ryan in The Lighthouse.
Main article: Rapture

In what country is there a place for people like me?ANDREW RYAN

Ryan’s response was to use his entire fortune to build Rapture; a community where “the artist would not fear the censor, where the scientist would not be bound by petty morality, where the great would not be constrained by the small,” in the only place he felt the “Parasites” could not touch—the depths of the Atlantic Ocean. Ryan personally chose the location of Rapture from his ship, “The Olympian.”[14] He created shield companies on the surface like Warden Yarn (an anagram of his name), and through it conducted business with suppliers, such as Orrin Lutwidge’s Scarlet Sovereign Import and Export, to purchase materials necessary to build his city. When Rapture was completed, Ryan filled it with thousands of the world’s best and brightest individuals. 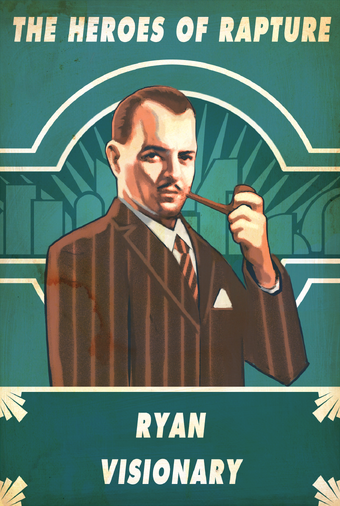 Andrew Ryan, one of the heroes of Rapture.

For a time, Rapture was everything Ryan dreamed it would be: a paradise of freedom and prosperity. From 1946 to 1958, Rapture experienced tremendous economic progress, and solid political stability. As Ryan predicted, citizens in Rapture created a culture of entrepreneurship that was unrivaled, with numerous businesses established and unprecedented scientific advancements, including the discovery of ADAM by Brigid Tenenbaum. The full ramifications of the Plasmid technology were not immediately appreciated by the people of Rapture or Ryan who dismissed the concerns of men like Rosenberg and Bill McDonagh. Ryan’s failure to understand the effects of the burgeoning ADAM-based culture allowed the destructive rise of the fishery owner, smuggler, and black market operative Frank Fontaine.

With Rapture at its apogee, Ryan’s greatest supporters maintained control of many sectors of the city, such as Sander Cohen in Fort Frolic and J.S. Steinman in the Medical Pavilion. Ryan had hired a man named Carlson Fiddle to build Ryan Amusements: a theme park that doubled as a propaganda tool for the children of Rapture, with Ryan himself providing narration for many of the rides and animatronic set pieces. Its primary purpose was to warn of the evils of the Surface. The theme park eventually embraced the city’s new ADAM-culture, exalting Plasmids like Incinerate! in a Hall of the Future section of the park.

Mine to keep to myself