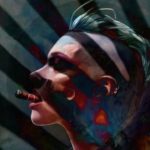 Whistle Bang. "I fuck em up when they come for me, and I do everything myself." 36 years old, immature, messy, and she's a things over people kind of person.

None, who is there beside rat-punks around here?

Lizzy grew up and spent her formative years in the now dilapidated state once praised for it’s superficially Utopian appearance. Homes looked like they were plucked straight from the 50s USA, manual labour was saved only for those who broke the remits of The State and each person’s life was given to them assigned with perfect accuracy. Lizzy, then married to a man by arrangement of The State was like anyone else of the time, immersed in the daily brainwashing and carefully selected media feeds. That is until it finally collapsed, riots and looting ensued as the artificial intelligence which was once understood to be the greatest Authority on earth was exposed to be a facade for it’s designers.

The true history of this nation is irrelevant, though interesting, because for Lizzy Gallagher – the world is no longer one of information and connection, although some may debate that it ever was. In fact, ever since her survival of a traumatic and eventful night during those riots, and on finding her husband and child dead in their destroyed home, she had barely spoken to another human.

The greater population had mostly became refugees, but then most had the means to do so. Lizzy who did not, never believed she loved her assigned husband, yet since that fateful day came to think of him daily. He was a mechanic, an ex-con who was considered too typically masculine to be permitted access to the higher forms of education. Yet now, as she sits what used to be her living room, far from the high-pony tails, floral blouses and long ankle length skirts of her past, she pushes herself to learn what she can mostly vaguely remember from him.

Underweight, in fact undernourished, utterly liberated by the lack of eyes and judging cameras, she dressed for flexibility and comfort. If she’s honest with herself, which she seldom is, she likes to dress provocatively – it’s the stimulation of her mind, by breaking taboos in what was once a universal dress code for those with the signor ‘CUEB’, Classical Unearned Beauty.

Her living space is a mattress often propped on a sofa behind windows that no longer have glass, with tools, a sewing machine, nail trays full of pins, nails, screws – and work benches, some with scattered first aid kits and toolboxes. Her life goal for the past 12 months has been to get the rusty car in her drive way working without any education in mechanics, and to survive the next winter better than the last one.

After so long being trapped in that doomsday city, she finally worked out everything to do with that car, and was able not just to get it started, but get it purring like a pleased cat. She took off away from that city once and for all to find her ending elsewhere. With tears down her cheeks, and glue in her plastic bag -huff huff-, she drove past the dusty and dead country she once believed was a perfect utopia, and into her unknown future. 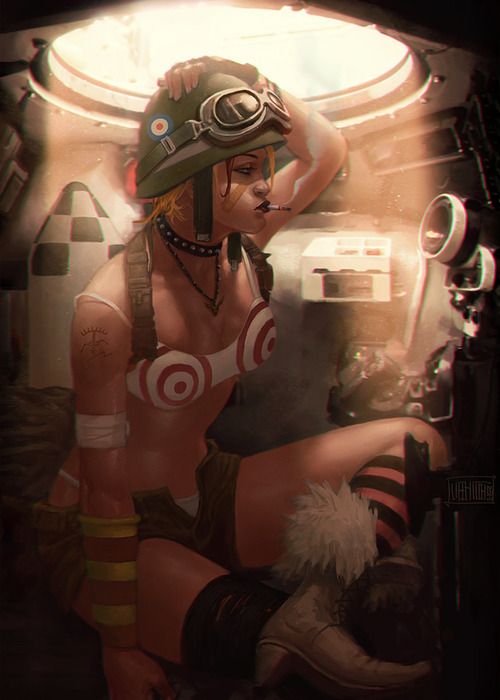 attractive, unusual features – with narrow almond eyes. Her bottom lip is predominant, and while she may have been beautiful once, but the habitually applied liquid eyeliner that inevitably runs and inevitably smudged lipstick, combined with her cold expression may ruin it. She’s underweight, and muscularly toned more than she’d ever want to be particularly in her hands and forearms, veins on her neck stand out if she postures upright and her body is typically petite.

Additionally, a scar on her bottom lip, across her eyebrows, cauliflower ears and often shaved head and rougher hands give off a fair warning as an impression that she’s no longer a woman of doting motherhood and small talk with neighbours over their freshly trimmed hedges. Immaturity adds to her posture, though in her mid to late 30s, having been raised and formed in such a controlled society left a lot to be desired concerning mental maturity.

To a stranger, they may see her as dressed entirely for comfort and eratic in her sense of style, possibly provocatively dressed in very little but to her it simply means the pleasant feeling of air over her skin and ease of movement. She no longer cares, all she wants to do is get back to crafting what she wants to craft on any given day, and it’s apparent by how little she cares for things such as oil on her cut off top and jeans, wear and tear on her trainers and so forth.

a very effective Glue gun is always close by, usually sat on a carry red-metal tool box or in a holster.

In wrenches and screwdrivers.