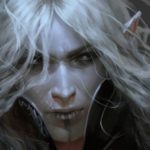 active 1 year, 8 months ago
@emilylechsinska just a greeting from another vampire. View

Does immortality grow old? Of course it does, and yet the romance of dusty places remains strong. The bitterness that comes to some in old age, wears it’s way into the bone and grief too. It doesn’t take too long for the elderly hands held in passing to erode the heart’s ability to truly feel, and following the heart goes the life once seen in the eyes.

Eventually even the greatest wisdom remembered passes into silence, and words eventually become the tweet of birds. Soon, goodness is all that feeds, and even the blood loses it’s taste.

a friend of the old and ageing, a slayer of the cruel.

In 871 – a young, olive skinned boy traded mortality for love, which in time became an agonising footnote in a journey too long to number. In time indeed, did that agony become a dull ache, and that dull ache become a numbness, and that numbness became a cold peace.

Through the centuries upon centuries, the eager and once good hearted boy experienced much.

Thus, this is thrown to the mystery. What is left to say, that he pities the old, their struggle is the only thing left that brings his heart a whisper of emotion.

Their wishes become his motion, to guardian over them was his final mission until the fateful day one begged a promise from his lips, to watch over her grand children. He obliged, and in the following decades, unseen by them he found how heart strings tie people together in a way he once knew.

It has been a thousand years since that last smile, and since then has come to wondering as aimlessly as a leaf on warm air. His mind grew silent when all the thoughts had repeated themselves a million times. Catharsis by the grinding of time, skin numbed through a billion touches, he moves from one place to another. Nothing changes like the world, nothing stings like goodness.

Having lost the appetite to feed, his skin grows pale without pigment save the ancient tattoos on his lips. Hair wild and white with age. 5’8”, slender and incredibly strong.