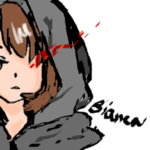 sabercreed was created by a depressed scientist. Before he commits suicide, he wanted to make something that has never been created by any scientist. he took
5 years to build the advance robot sabercreed. And now the sabercreed project was finished,He maked a female Dna that makes the robot act like human and human appearance and emotions and needs. and all the informations of him of everything transferred to her and thats the scientist committed suicide. sabercreed left alone unconscious in the lab but 2 days later she woke and roam the earth.

inside her backpack is stuffs she needed like clothes, books, celphone, laptop etc

i love milkshake and icecream