Fears: Being cooked, poached, and/or hunted, vampires, Death Eaters, vampires, foxes named Ruby, and the Void (did I mention vampires?)

Psychic/mental effects as a result of magic, some human-specific diseases (but not bird ones), the cold, mind-penetrating abilities (such as mind reading and mind control), and sexual temptation

Regular: Brad stands at 6’0 and has a mass of about 82 lbs. And yes, that’s mathematically correct. His wingspan is roughly 4 m too. He’s a literal giant owl! Just Google ‘Male Snowy Owl’ and scale it up. He often wears hats in this form. If you meet Brad, chances are you’ll see him like this.

Small: Brad is a little bit larger than an average Snowy Owl, standing at 3’0. His mass is 3.2 kg. Usually you’ll only see him like this when he’s devastated or distraught, such as after a friend dies.

Humanoid: In this form, Brad is a humanoid creature with an owl’s head and wings. He stands at 6’0 (once again) in this form. His mass is about 224 lbs (it’s the feathers, I swear!). The increase in weight is most likely due to him having a more human-like anatomy, as well as being covered head to toe in floofy feathers. Like, actually. His impressive build is another factor that contributes to his weight. And no, he’s not fat. He’s an owl, for crying out loud!  The wings on his back are about 6 m across in this form, although they’re not shown in the picture. His legs are very powerful and maybe even thicc (have you ever seen owl legs???), so don’t get in the way of a kick. Adorably large ear tufts and tail feathers are also prevalent. His feet are heavily-feathered owl feet, with four sharply-taloned toes. He can rotate one of his toes so that he can have a regular bird foot, or two toes in front and two in the back (all owls can do this). His layer of feathers is so thick that some blades might not be able to cut through it. And finally, the lighting of the image makes him look grey-ish, when in reality he’s snow white. This form is pictured below, so you know what it looks like. 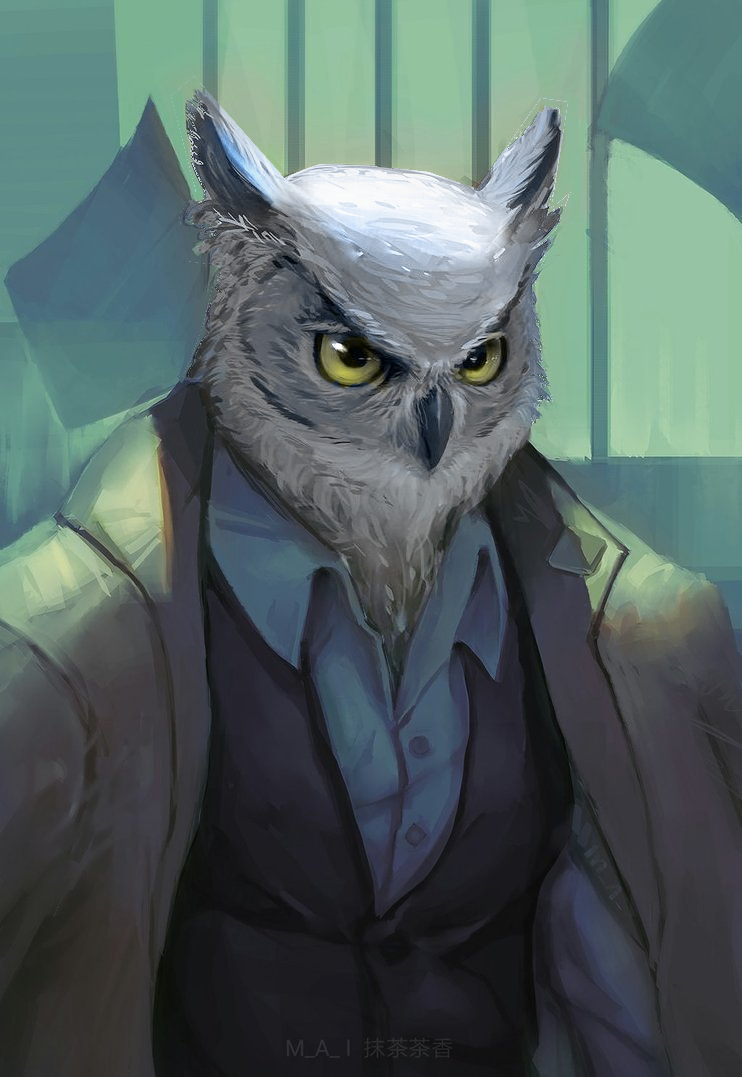 P.S. If you can’t see the image, follow this link.

Shockwave: Brad can quickly charge, and eventually release, a shockwave.
Static Charge: Brad can statically charge his feet or wings, eventually releasing a spark. The size ranges from what feels like a carpet shock, to lightning of biblical proportions.
Vacuum? No problem!: In space, like most, Brad can’t breathe by himself. However, he won’t suffer any other effects even without a spacesuit. There are numerous effects that he doesn’t have to worry about, and he’s never been successfully captured for experiments to figure this out.
Flamethrower: Brad can breathe fire, with a maximum range of 50 m in air. When Brad does this in a vacuum like space, the range is unlimited. Since there is no air in space, Brad uses his own oxygen supply to make fire.
Calabi-Yau: Brad can move to the 4th spacial dimension or higher, using up a little bit of energy. He’ll be hidden inside a Calabi-Yau space, and can exit at any moment, reappearing anywhere he likes. This is almost like teleportation, in a way.
Boop: When Brad pecks someone, he can knock them out pretty easily. A cracked skull is something one could potentially see after Brad uses that beak of his. His beak can punch through iron armour.
Owl Stare: Brad can look someone in the eyes, and if said someone makes eye contact, he can stun them temporarily without even blinking. How he does this is not yet known, and Brad has never been successfully captured for experiments to figure this out.
Gaian Birb: Brad can use his Gaian powers to heal, restore energy, and more.

Unyly: Brad is the creator and ruler of an extremely advanced supercity called Unyly. It takes up roughly half of the surface area of its planet, which is about the size of Mercury. There are large national parks inside the city, protecting the natural wonders of the planet. Unyly boasts a powerful, advanced military which only grows every time it takes over another military. It has been known to conquer other fleets and even entire occupied planets, only adding to its arsenal. The whole planet is heavily secured and guarded, and there are always patrol ships and cars cruising around Unyly. Good luck trying to destroy Unyly, because it rebuilds by itself.
Allies: Brad has some notable allies, including Sasuke Firemist ( :'( ).
Planet II: Brad helped establish trade with Planet II, which was made habitable in order to house refugees from the Void crisis. Through Unyly, he helps equip them with stellar military equipment and new technologies.
7e+09: Brad is secretly working with a planet far away, in the Virgo Supercluster. The two are working together to develop new technologies and were formerly looking for ways to get rid of the Void.
Owl of Gaia: In the process of defeating the Void, Brad begun to see things. Feel things. It turns out that a Gaian blessing was in store for him! At this point, everyone had died after turning into objects (yup, literally. Brad was a recliner chair) and burning. Brad, however, came back to life in a flash of light, and anointed Kaler Eland. Kaler is now the Guardian Knight of Gaia. He also called back all of the Children of the Light, living or dead. He’s now the high priest of Gaia, and has seen Gaia herself. However, he prefers the title “Owl of Gaia”. This has made him extremely powerful, but also a target for evil.

Depends on the situation.