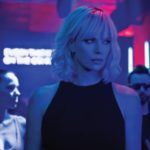 Skin: Pale, ivory with a smooth and flawless complexion.

Hair: Her hair is a pale blond that falls to her shoulders, bangs falling a little past her eyebrows. The color never changes, but the style may vary from straightened to wavy. Usually, she’ll leave it alone and let it fall freely in loose waves.

Piercings: A stud, the right side of her nose. Multiple on her ears. Back dimple piercings.

Scars: She has none.

Opinion of vampires: While the company of someone “like” her would be more favored, she mostly treats them just like she would any other being. Just.. without the feeding part.

Opinion of non-vampires: Depends on her mood and state. They could be a meal or company.

Personality: Sasha is intelligent, cold, and eerily calm. She holds no mercy or remorse when it comes to her victims, nor enemies. Many have tried, and none have succeeded at striking a nerve or getting a reaction of anger from her. The hybrid adorns an unsettling factor of seeming emotionless at times, really not the one people run to for a shoulder to cry on. No, those who manage to get close to her only glimpse the rare gestures of warmth from the woman.

She’s unpredictable, and not the sanest. That may just be what makes her such a challenging enemy to have. You never know what her plans are, her next move, nor if her words or threats are true. One could have doubts, then, it turns out what she said was truly meant. However, she is a trusting ally to have if you manage to grow ties with her. She’ll remain loyal, never acting against her allies unless having knowledge that would lead her to do so.