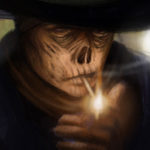 “We’ll be safe down here, Lonnie!” He’s made up of bad decisions.

Before the bombs fell he was a simple, 20 something year old sheriff in Jackson County, with a night life as a gambler and a heavy drinker. Still the latter if he can help it. He lost his wife to the habits that ensnare him and his daughter to the one huge miscalculation that lead up to him looking like mellow jerky…

He’s made up of bad decisions.

-A Western Revolver
-A Hunting rifle
-A bottle of Nuka Cola Quantum
-A bottle of vodka
-Stack of pre war dollars
-Small pouch of caps
-Whatever he’s scavenged on his ventures
————————————-
Often times walks around with his cat Grace. An irradiated feline.

His free time consists of cataloguing/hunting the wilds of Hellifyno, drinking and doing the odd job where necessary. Like most he has no idea how or why he came to be here but damn… if it weren’t far enough from the troubles of home.

||And my dear mother left me

When I was quite young

She said “Lord, have mercy

"The world'll carry on after you're gone."