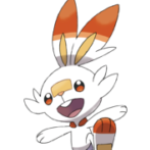 Mainly guys..cause I've been hurt too many times by women

A warm-up of running can cause the fire energy in Scorbunny to start coursing through its body. When this occurs, Scorbunny will be able to fight at full power. The special pads on the back of feet and nose can generate heat once it is ready to fight. Scorbunny loves to run and is filled with energy, and can start small fires from underneath its feet. By using its powerful legs, Scorbunny can run and jump around its opponents in order to confuse and disorient them

I hate being called cute