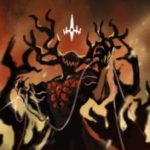 He who shook reality with his awakening, he who destroyed the wanderer's library, he who killed the Brothers Death.

I was named Haarak, although now I am the Scarlet King. When I was born along with my brothers or sisters, I wasn’t like the others. What made me different is that I was aware. Aware of the pain reality brought. So I killed my brothers and sisters, consumed them and stole their power. Then I slept, I dreamt and dreamt for millennia after millennia, eon after eon. When I awoke, my power shook reality, I was ready for my quest. I’ll spare you the details, but what I will tell you is that I won, but sadly, I, along with the Brothers Death, perished. But it didn’t matter. Their reality was no more. I had won.

My appearance is beyond your human understanding. What you view is an illusion.  The illusion is humanoid and pitch black. On its head sprout two long horns and a floating glowing crown between them. It has no eyes, instead one giant maw on its face. And it’s chest, however, there are a dozen or so eyes in different sizes. It clutches two chains, both infinite in length. Its voice is neither high, low or cacophonous, simply just being. It’s also always moving, with a slight echo, swirling around you.

Everything that is, will be or isn’t.