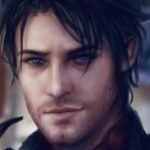 Lyte was a mere commoner with a kind heart and a talent for the arts. He frequented The White Raven Tavern most weekends, where he would share his creations with carousing friends and courtesans. One night he was seduced and sired by Saria, and thus became a vampire, inducted into Lord Dritz’ vampire coven in the desert territories – the infamous Omen clan. Lyte was enraptured with Saria’s beauty and fire-like spirit, but he could not endure the horrors she and her family performed each day.

Lyte fell in love with Saria, and though he detested her evil schemes, he kept silent, hoping to win her to the light. The two were married in the third year of Lord Dritz’ reign, but Saria was unfaithful to him, and Lyte’s agony grew with each starless night. Her thirst for blood and vengeance could not be reconciled.

The coven’s rebellion and sin grew like a hungry mouth, gasping for water. They were eventually banished outside city walls of nearby territories, and they took residence in caverns and underground caves – pillaging, raping, and murdering helpless travelers. And Lyte could not endure it any longer.

One moonless evening, Lyte fled the coven and into the desert wilderness. He eventually collapsed from grief or blood thirst (he wasn’t sure which) at the top of a large sand dune, weakened and heartbroken. He sat all night, singing songs of love, songs of war, and finally of repentance, crying out to his God that he did not want to take part in such cruelty and hate. And as light began to glow from East, he thought it poetic to let the sunrise decide his fate – that his ashes might be carried away to some foreign land, far away.

The sun rose. And nothing happened. He sat there, confused, squinting into the sun through golden beams of light. He thought he heard a voice from the heavens whisper tender secrets too wonderful to describe. Thus ends the tale of how Lyte became a daywalker – not by blood, but by the sovereign will of his God.

Lyte made an attempt to warn his coven of their evil ways after learning of a king’s plot to route the diabolical vampires – but they did not heed any warnings. Saria at first scolded him, then begged him to stay – but Lyte’s resolve was sure, and they finally agreed they could not sway the other. With tears in his eyes, Lyte left the coven for a final time. Later that week, news spread that the coven had been all but decimated, and Lyte’s heart sank.

Six months later, a traveller tracked down Lyte in order to inform him that he had earned a hefty inheritance from Zoe, another beloved vampire from the Omen clan whom he regarded as a sort of “aunt”. In her will, she gave The White Raven tavern to lyte – to own and operate as he saw fit.

Lyte travels to Hellifyno regularly for restocking purposes, gathering various trinkets, artifacts, beasts, and companions along the journey. Currently, he is working out the details of more inheritance left to him, still after all these years (the vampire family must have had lots of secrets!) And still all the while, his kind heart prevails, eager to help a stranger in need.

Lyte grew up in an orphanage at a late age, and he still struggles to remember his early childhood. He developed a close relationship with a girl his age in his foster family. The two became very close, and even as adults – they run The White Raven tavern together, and solve its many mysteries.

Lyte and his sister “Cutie” own and operate The White Raven Inn and Tavern in the town of Dark Water, receiving the place as an inheritance from Zoe, though the deed the mansion and location may be questionable. Rumors of Lyte’s inheritance have stirred troubles in the darkness, with other covens and vampire clans seeking power and control of the tavern, because of the strange secrets it holds.

TIP: If you are a rogue or well travelled individual, your character may likely have heard of Lyte’s infamous coven called Omen. In that case, you have full permission to write about past experiences and crossovers with coven, or its characters like Lord Dritz, Emilee, Saria, etc. These will likely be undesired, off-putting, or horrifying experiences.

18+ RULES: Please understand that if scenes become too graphically violent or sexual with my characters, I reserve the right to “fade to black” and move on to the next scene. I’m not on here to indulge my fetishes and fantasies, but to tell epic stories.

Lyte looks to be about 35 years old. He has a medium build, standing at around 5′ 10″, wearing a rough haircut of wavy dark dirty blonde hair. There is likely stubble showing on his strong jaw and chin, since he’s often “on the go”, shaving irregularly. His eyes, a tad sunken underneath strong brow lines, subtly shift and flicker with his mood, falling within green hues. He wears a rogue’s outfit, a designed blend of tans, browns, and ambers – with elvish and celtic markings and etchings. His behavior is rather relaxed, informal, and happy – exhibiting much more human behavior than his vampiric counterparts.

Lyte carries daggers with him in his belt, and occasionally a medieval rapier. He is always wearing a necklace with a gold ring on it.

Lyte believes most creatures can be exhorted and redeemed, but his brutal experience with Saria sometimes makes him initially distrustful of vampires. He is a servant of righteousness, aiming to give, not to take. He is respectful of female characters – so if he develops a romantic relationship, he will insist that they marry before going too far physically.