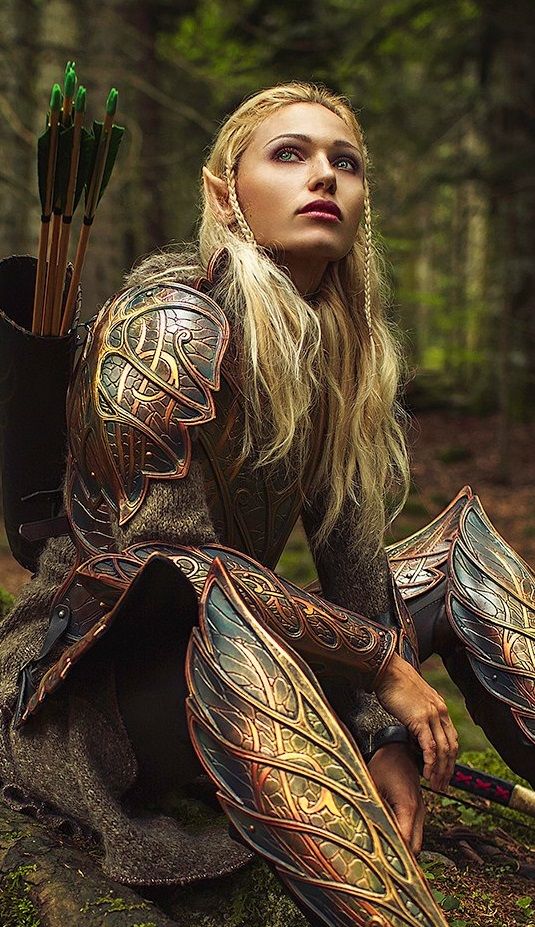 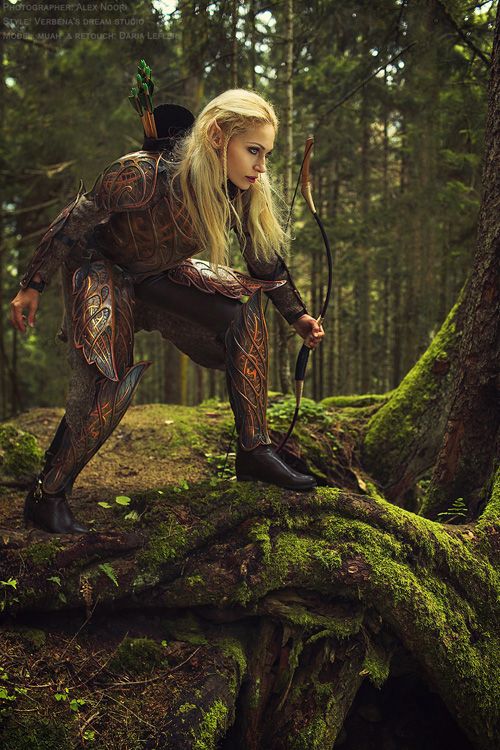 Appearance: Ilyraina is a dainty thing which is common for elves. She has a runner’s physique compared to the more athletic appearance of women her size with long, blonde hair that falls to her shoulders. She has piercing gray/silver eyes that are almost always alert and revealing of her emotions. When out and about, outside her forests, she most often wears her elven armor, though made of faux leather rather than any sort of metal, aside from the rivets used to make it. Beneath said armor is a black cloth that covers the better part of her body left exposed by the weaknesses of her armor. 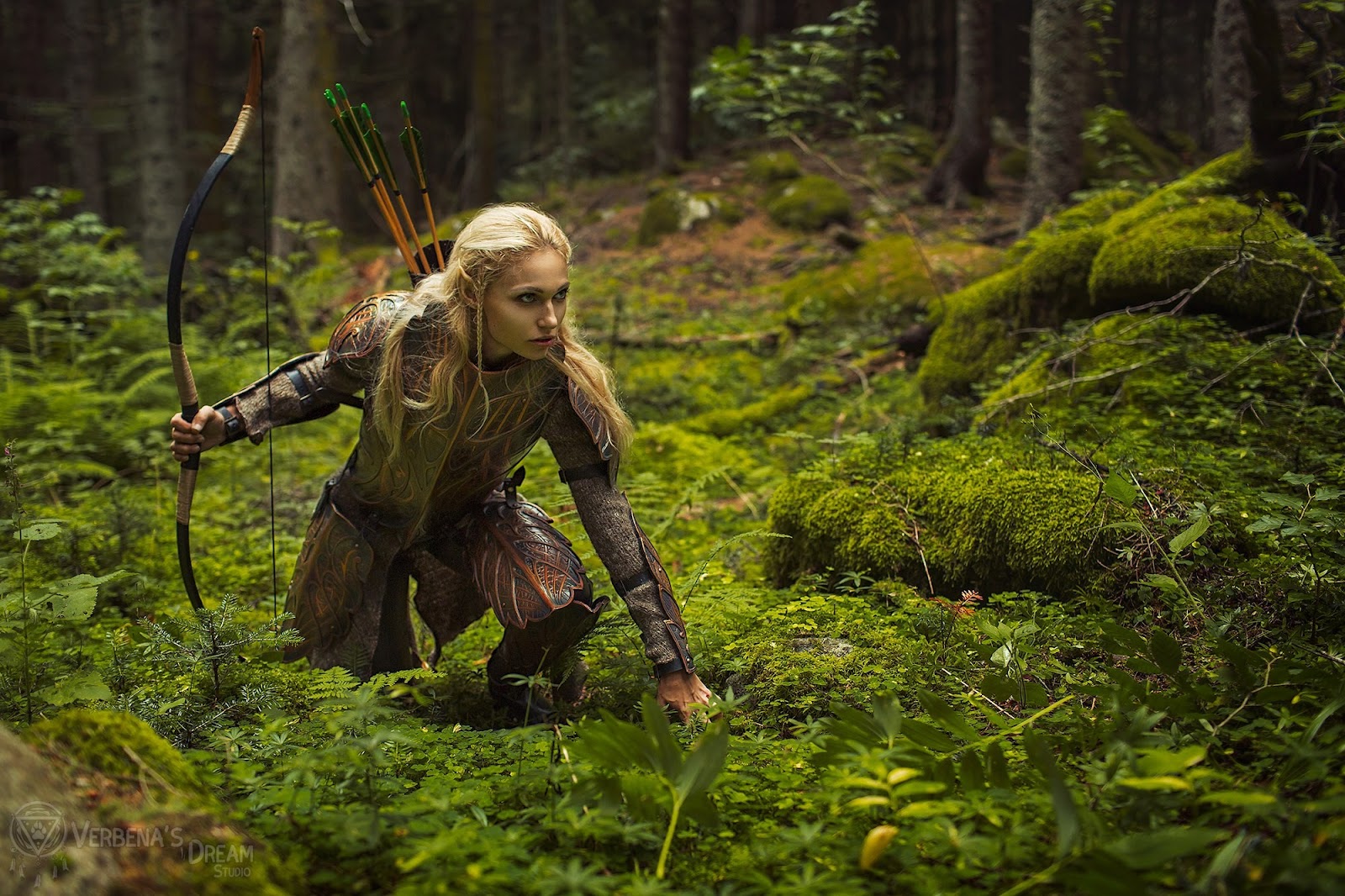 Weaknesses: The desire to be left alone, team work, strongly opinionated, Elf sense of being

Spells: Very little is said about the Silvan Elves or their accomplishments, so we don’t really know if they have magic. If they do have magic, it is likely nature-related. The Green-elves of Ossiriand were able to keep safe through stealth; they were able to blend into their environment so well that if they didn’t want to be seen, they weren’t seen.

Nature’s Harmony – Silvan Elves who use this magic are able to commune with vegetation they come in contact with such as trees, flowers, etc. to an extent where such things come to life for a small period of time to lend their help. This could be used as a battle spell but is most commonly used to find food for groups larger than two people.
Stealth – This magic hides and blends them into most environments that have to do with forestry or some sort of wooded place. It makes moving around easier but can be undone if they get too close to enemies or otherwise make too loud a sound.

River’s Song – This spell calls upon ancient river spirits within a woodland forest or elsewhere to locate a source of water or even to use it as a weapon which isn’t often done. 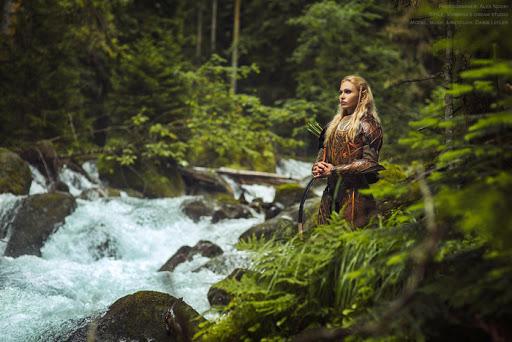 Personality: Ilyraina is a product of her environment. She is friendly to humans and hobbits to a fault, even to other creatures of the Middle Realms but cannot stand dwarves for a number of reasons. She is complex, often giving herself over to authority figures and is level-headed for the most part. She can be stubborn and self-absorbed but also pragmatic and to the point, even so far as to call herself blunt.

She meticulous about her tasks, does rather rather great about handling whatever she’s given as a responsibility. She believes everything that happens is meant to happen and cannot be faltered toward another direction. If in the midst of an argument, she will almost always give right into the qualms of whomever she’s arguing with but that mostly depends on who that person is. She doesn’t like conflict.

Otherwise, she’s focused, intelligent, and intuitive, often giving way to ignoring things that could be called self-serving. She is somewhat insensitive to certain situations but that can ultimately be blamed on her being mostly Sylvan elf.

Illyraina is the byproduct of two Sylvan elves, one of which was begot by a human father and an elf mother. She was born in Mirkwood, which was then called Lórinand, about a hundred plus years ago in the midst of conflict. Her parents, an integral part of the community, both holding place among the royal guard, were not expecting her at all and seemed to show it in the hostile way they brought her up. From the moment she grew old enough to put a bow in her hand, she was trained to take a spot among the other guardians, of course with a sword and a bow in her grasp.

Almost right away, she found that she was not going to get anything easily from her parents, one of whom had not had the patience of the rest of her kind since day one. She trained eagerly and without abandon, finding pleasure in life with her time in the forests, learning how to use them to hide and to find food through foraging and other skills. She was taught of customs, both royal and low class, as well as how to interact with outsiders to the forest who were viewed with suspicion much like other elven communities which often made them unfit when time for war sprang on them.

She was disinterested in the war of Wrath and as she got older, began to struggle like the rest of her clan when it came time for them to live as refugees when Sauron began to rise. She had just come of age, unfortunately, and the time for her story truly began. She had found no real companionship, aside from the animals of the forest or the books that the elves kept within their halls. She had trained to become a guardian, though her parents were killed and her place came up for grabs a couple of years before she was able. Her uncle, on her father’s side, took up with the guard and as he became her guardian, she was pushed out of the task and into scouting position since she knew the trees of her forest inside and out. She was among the many who chose to take refuge with the others who chose their ancient home as a place to hide during the warring periods.

Fortunately, her mind was of a better path in trying to fight for her people’s well being which is why she is made readily available for quest or great paths moving forward.