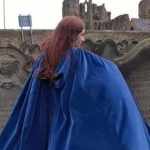 species:
tainted bloods/shadow phoenix
evolved from humans that live in the life fire void. They adsorb magic from there surroundings that is then trapped in there blood. It affect there ability and help them adapt to there surroundings. One ability all tainted bloods have is the ability to crystallize there own blood that can then be used to make a verity of tools weapons ect. They appear human in most cases but can often alter the sent to help stay hidden. The best way to identify them is to look at wounds to see if the blood is crystallize. All tainted bloods are born without there ability and are awoken through being exposed to magic. Ones they have awoken they have a permanent scar that shows gives an indication of what awoken them.

the heir to the tainted blood thrown that remains remained empty for over 50 years after it was attacked by humans she was the granddaughter of the second in command. Her grandmother fled by portal while carrying her farther.

Selena was born into a travailing group of tainted bloods that was attacked when she was a few months old. That attack left her alone in the forest where she was found by the shadow phoenix. The shadow phoenix took her sole splitting it into three one part was pleased back into the mortal body to live a mortal life. A second peace was given a consensuses mind and ability to take its own form and became her guardian. The third was kept by the shadow phoenix for her to fill with magic and return at a later date.

Selena was them found by her farther Silver Griffin Star who had soul bonded to Selena. Star took Selena to safety in an isolated forest that belonged to the fairy. Selena lives there until the age of 5 when an Elf named Erfaron travelling between villages found her. That was when she got given a name taken from a song by S J Tucker. Erfaron gave her the name Sorrow for she was a child with no one to tell her name.

Erfaron spent a few months with Selena teaching her about the rest of the island. They then travelled to a village inhabited mostly by humans. One night the lord of the village signed a contract to allow all non humans to be taken by a group of monster hunters. Erfaron helped Selena to escape by putting her on Stars back but as he was running to join them a hunter killed him.

Selena continued to travel with star until the first of the winter snow fell. She then found some other children that were travailing to a stronghold that was held by a lord promising them safety food and protection until spring. Selena went with them while Star looked for other tainted bloods. The stronghold turned out to be a trap to build an army to take against the vampire kingdom and for half the winter Selena was forced to train. One day she found a way to escape in one of the cellars was a vat of flammable liquid. Using a phoenix feather to light it she was able to blow a hole in the side of the wall to escape through.

Her freedom was short lived as as soon as she was out of the stronghold she was garbed by a vampire that had been scouting for week points. The vampire was the next in line to the vampire kingdom Victor Rose. He took Selena to his farther Darrien who resiled she was a tainted blood and told his son to keep her safe until after the battle. Selena was then taken back to the vampire kingdom r where she was given a new name Selena Blood and taken in by Darriens wise woman and adviser a vampire called Mary who raised Selena alongside Victor and his younger brother Sabien. Selena and Sebien eventually became soul bound (a connection that tainted blood form unwillingly with those they trust) while in Mary’s care she learned to use her ability and found Nuray the fragment of her soul that was separated to act as a companion and protector

When Darrien learned of Selenas connection with the shadow phoenix he called a counsel that meant that Mary had to leave for the main city leaving Selena alone the brothers were also sent to train away from Selena to take there roles as rulers. New spread about Selena connection to the shadow phoenix that put the vampire community on edge leading to Selena being attacked and fleeing the vampire kingdom at the age of 10.

Selena spent the next 10 years travelling and learning with Nuray and Star until she stumbled upon the remains of the dragons nest. In the nest she was attacked one of the dragons children that had became a Wraith after dying in the darkens after its mother was killed by humans. The attack forced the shadow phoenix to appear and return Selenas soul fragment making Selena part Phoenix and securing the magic that kept the life-fire void together was alive. Selena then was able to compete with the Wrath that eventually became soul bound to her.

Selena spent the next year finding the other three wraiths that lay dormant on the island awakening them they them became guardians of the world. Selena also started to travel between worlds having learnt that she could now find portals in the voids walls.

sword made of a blood red crystal

normal has some daggers or smaller blades made from various materials