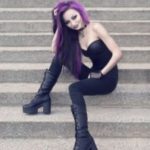 The witch of fate

Serenity Bastion. Witch of luck and Fate. Et ex fortuna fatum pythonissam. She could change your life.. or end it. Beautiful, dark, bold, Serenity was a player in a game she hadn’t volunteered for.

Born in 748 BC, with long locks of blond hair, and beautiful blue eyes, Serenity was lusted for. And yet, she never once thought about anyone in a sexual way. Untainted, pure, a virgin, Serenity was a great prize and one man had his eye on her. Eulysias, a great king in the empire of Rome wanted Serenity. And he got his wish. Serenity’s parents sold her off to the king for money not caring about the hell their daughter would endure.

The first night, he tainted her.

The second night, he did it again.

Every brutal night, she was taken against her will, despite her screams, and cries and sobs. This was how it was in her empire. She prayed and prayed to the God’s to save her. Prayed to Artemis. Athena. Aphrodite. Zeus. Even Hera. Yet no God took pity on her. No God saved her. And one night… Serenity began to pray to a new god. One not many had heard of. The De mutatione autem pythonissam, or the witch of change. She prayed and prayed, and one night, after Eulysias had finished and fallen asleep, the De mutatione autem pythonissam whispered in her ear.

“Kill him~ Give him what he deserves~ your gonna let him get away with treating you like that~?”

No. No she was not. It was time. Swiftly, she swiped up a dagger he had been using to cut cheese, and didn’t hesitate to slit his throat.

Blood bubbled up with a gurgling gasp, spilling onto the bedsheets. Fascinated, Serenity leaned forward… And dipped her finger tips into the cut of his throat, feeling around curiously before a loud cackle rang out of her lips. Blood spurted up, staining her white dress, and her cackles broadened into hysterical laughter. All while the De mutatione autem pythonissam watched in fascination. She was a good little pet, licking the blood from her fingers. Sanity gave way to insanity, and at that moment all traces of who Serenity had been fled. Now Serenity was a monster. She lay on her dead husband, seemingly entranced on how his blood soaked her white dress.

And that was when four guards burst in. “PROHIBERE!” One screamed. ‘Stop’ in latin. Cackling, she slipped off of the dead king, and leaped forward, slashing and stabbing fiercely with her dagger.

But.. four against one, she was no match. A guard managed to send a sword through her gut, and impale it into the bed post. While they all ran off to get more guards, the De mutatione autem pythonissam appeared. Cooing to the dying Serenity, and granting her second life. And then all went black.

When Serenity awoke it was November of 2011. She was terrified. Not knowing where she was. Or even who she was. All she knew.. was that she wanted to kill. To fuck. To reap souls. And so she did. Until falling through a rogue portal into Hellifyno. Becoming the purple haired, undead demoness she is today. Will you fall victim to the Et ex fortuna fatum pythonissam? Will you become her plaything? And if you do find yourself praying to her… Is it really worth it?