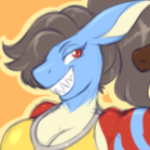 Age – roughly 16 summers, as of the time this was written

Personality – Siku starts off a tad bit shy, but once she trusts you she becomes brash and confident. She’s a rough gal, and isn’t afraid to stand up for herself, despite her small stature. Siku may have a small frame, but she’s packed with muscle from all that hunting up in the Arctic, and also her intense, daily workout sessions. Back home, she was tasked with hunting down the biggest game she could find — Siku can take down a fully-grown, male moose with nothing but a trusty hunting knife and some effort. And she was very good at it, too. However, she was also known to have a soft side.

One sunny day, Siku woke up in the snow. She was unable to move, as she was just a baby shark. (I’m sorry for getting that song in your head) How did she get there? How could she breathe? And what were those… appendages? Hands? Feet? Was she a person with shark skin? The little shark only knew one thing for sure — and that was that her name was Siku.

One day, Siku was shivering during a cold night. She had managed to drag herself, but not walk or crawl. Her body was too cold to move, so she laid there, curled up into a ball. That is… until a couple of people wearing fuzzy coats and funny shoes found her. They looked pale, and were probably men. They held long sticks with sharp stones attached. One of them picked up the helpless, humanoid shark and cradled it in his arms. Siku can still remember being cozy and warm in the man’s arms, feeling his heavy footsteps as he brought her back home; rescued her.

And so… her upbringing as an Inuit began.

As the years passed by, she learned all sorts of new skills. How to hunt, make a fire, speak and read the language of her peers, and more. By the time she was fourteen, Siku was a fully-fledged member of her Inuit community. Respected and even admired by her peers for her strength and ferocity, she was quickly given a lead role in hunting for her group. Everything was going well. However, one day, she didn’t return home…

Siku was out by herself, on the prowl for game to hunt. Fresh snow had just fallen, and with the sun going down, it was getting colder. To make things worse, a blizzard soon hindered her visiblity, and ice crystals began to sting her face. She turned around and began heading home… but home never came. Siku wandered far and wide, searching for her loved ones and her home. She called out countless times, and walked for many hours, but home was nowhere to be found. Eventually, Siku began putting messages where she’d walked (in the form of carvings in wood and stone), in hopes that her friends and family would be able to find her. One day, however, she trekked for too many hours, and the cold got the best of her. She succumbed to the cold, and the poor shark girl heaved her final sigh on the cold, wet snow.

Siku woke up in a new world soon after. She remembered everything right away — her family, her home, even what had just happened. The scenery was different — instead of a cold, desolate tundra, she saw a city for the first time. What was this place? The landscape looked similar to home, but she had never seen any city so big and advanced back home. She ventured into it, and tried to ask the citizens where home was, but they couldn’t understand her language. Siku couldn’t even understand them. The poor shark girl wandered aimlessly, trying to find someone that would help, but her efforts were futile. Siku was forced to adapt to the city life and move in.

Siku now lives in Coeur D’Argent, and is still adapting to life in the mountainous city. To keep her skills sharp, she does intense, daily workout sessions and actually goes hunting every once in a while, in the untamed woods and mountains surrounding the city. She uses the hockey arenas to her advantage to hone her hockey skills, which she gained during her younger years with the Inuit by playing scrimmage games. She’d much rather be home, but with easy access to food and all these creature comforts, maybe the city life isn’t as bad as she thought. If you can’t see the pic, click this link.

All credit for the artwork goes to its creator (NekoCrispy).

Siku has a large knife collection. She also possesses a Honda CBR1000RR-R SB superbike, but that’s not really a secret if she rides it out in public, now is it? (long name for a bike, isn’t it?)