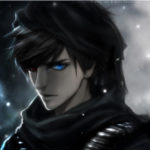 I was born in a small village on the coast far from the Capital and because the village was always under threat of being raided by bandits of the woods and Pirates of the seas. My Father (Who was chief of the village) was the protector of the village and was a fine swordsman but sadly all lives must come to an end and he was killed by a Pirate captain that the people of my village called ‘The Hawk Bearer’ because she was known to have a hawk at all times with her.
Years have passed since then and Shadow never took on his role as the protector of the village and turned his back on it however he still wielded his Fathers katana. Now he lives on the outskirts of Persistence and is a bounty hunter and eventually got the name “Shadow the huntsmen” I tend to be found in the more deprived areas of Persistence or at the Red Sun inn.

I have a black long sleeved shirt with straps on that hold my katana which lays on my back with multi coloured eyes (Blue on the left and red on the right).

A katana with ancient writing engraved into the blade.
A chain that wraps around my arm which can be released and wrap round my target.
Some money but I keep that in a hidden stash.
And a old photo of my father in my jacket pocket.

I hide my past from anyone that I become close to.
I act cold hearted but deep down I do care.
I once dreamed to be a hero but that died along time ago that is why I chose to travel to Consequence and not Persistence

I am an Atheist