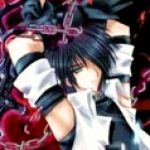 Besides Akashi/Shadow I have 10 other characters all in the story section of my page and I am willing to rp as any of them either separate or all together, though all of there stories are indeed connected.

My Rules: Okay my rules are very simple for the most part its what everyone else has okay.

1. 18+ or PG 13 either one works for me though these characters do work a bit better in a 18+ environment given that most of them are Vampire or a form of a Demon. I will also add that I myself outside of Rp am 18+.

2. No god moding even though most of my characters are vampires and I do have an angel character as well there not unbeatable.

3. I am fine with any storyline/idea though I will say that for sex rps they have to have a story behind them of some sort.

5. Not really a rule but know that I prefer to rp in inbox or comments however every once in a while I will be alright with a rp in chat or talking in there.

Personality(Shadow/Akashi): A little on the cold side, can be serious, kind for the most part though he can be rude or mean rather easily cause of his Demonic side though, curious at times, but most of all relaxed and rather friendly. It also changes depending on what side of him is in control as his Vampire side tends to be a little bit more caring while his Demonic side is of course is a bit more dark, he normally does treat others kindly despite him being part Vampire and part Demon regardless to what side of his is in control he is always nice to his siblings and to Midnight.

Family: Shadow is the middle child he has both an older brother named Zephyr and two younger siblings called Keiko & Sai though they aren’t around each other all that often unless one of them goes and seeks out the other or at family meetings or holidays at that, Shadow mainly lives with his mother and father cause of his traumatic past experience[Mainly with Keiko there is also another experience that had a very negative outcome on his life though].

I am a Vampire/Demon Hybrid and also a Prince

When Shadow was about a teenager his powers started to kick in the first time they nearly overwhelmed him at first but he’s gotten quite used to them and has them under complete control as such he can appear as a human. It was also back then when he first met Midnight when he was a human he was also one of the first human’s Shadow ever made friends with, he doesn’t really remember his past that well other then his parent’s were both hybrid’s like him between a Vampire and a demon he learned that along his bloodlines a long time ago what he had become although up until he was a teenage he though he was just your average human but then that one day came when he changed forever including his appearance as from that moment on he not only did he have claws and fangs he also gained wings from his demonic heritage. As far as blood goes with him he actually doesn’t really like killing off things but he knows he has to so he just does it to survive although he can go for quite a while without drinking any. Shadow’s original name that he was born with was Akashi but he changed his name shortly after the day he thought Keiko was killed. However he won’t exactly detest to being called Akashi or Shadow. Even if his name Akashi is filled with nothing but sorrow and nightmares of that day for him ever since he learned of Keiko actually being alive he doesn’t mind it at all. Zephyr had eventually found Keiko as a Dark Angel/Vampire hybrid wandering in the woods despite this he kept her presence a secret from Shadow/Akaishi as he didn’t want to bring up bad memories for his younger brother even if Shadow did eventually figure out just who this women was, he still won’t talk about what happened afterwards on that very same day to about anyone only those he deeply trusts will he ever tell that story too. Since that day he has trained a lot to be able to control his powers and can appear as a human he also allows pretty much anyone to call him Akashi as he has since moved on from his past mainly due to help with his friends and has even taken up living else where other then the castle though still does come visit there a lot he’s also much more willing to tell the story of that day to others and is fine with other’s referring to him as Akashi he has also taken up having a friendship with Keiko like he did in the past even if she didn’t really remember much of her memory Akashi had filled her in on a lot of it and even told her about her past self.

Look at my avatar that’s what I look like when my Vampire side is in control my appearance changes a bit dramatically when my Demonic side takes over but in both forms I have Crimson eyes. My demonic side is that of a Gargoyle so due to that my wings, claws and tail are all a dark silver shade.

Abilities: Super speed, flight, agility, fast healing, excellent hearing senses as well with other senses as there improved, teleportation, Demonic Possession(Which he never has used except once during practice), enhanced defenses specfically but he does have other things for instance his strength is enhanced beyond that of an ordinary Demon or Vampire.

I have many most of which I m not willing to share.