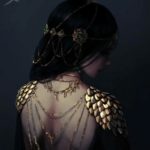 Safira Dhani, the Empress of the Empire of the Fallen Sapphire.

Safira is a kind and reasonable woman, respected, and an idol within the kingdom. She is looked up to by her followers, never being one to lead the Empire with actions firstly. War is a rare thing for them, and yet, not impossible to come.

Men, however, she is not open.

Taken, married to the Emperor.

Safira stands at a petite height of 5’2″. She’s slender, body-type being the hour-glass. While she’s daint and may hold delicate features, she is not scared to join her people on the battlegrounds if it were to come to it. Her hair is straight and healthy, falling like silk to her hips. Eyes holding a striking emerald shade, they are curtained by long lashes. While it is rare to see a commoner possess magical abilities, it is not impossible. However, the royal’s all hold said magic – unless the heir married to a commoner   (which isn’t against the rules in this Empire). Now, Safira’s abilities are healing, telekinesis, and air manipulation.