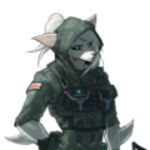 Well I'm not picky..as long as they love me dearly

Zoey was born in Chicago and at age 11 she was responsible for her younger siblings and was the only one who was the oldest out of them.her brothers and sisters saw her as a mother who was strict but fair…she is protective of her family and will not hesitate to kill anyone who harms her family and anyone she loves..

She has the ability to heal from any wound and has a high endurance and strength to rip a heavily armored soldier with ease and traverse rough terrain with ease..