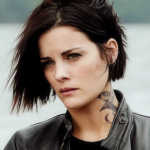 ”I like making complicated things easy. That’s what I do – I make the complicated less so. Easy. I like easy.”

There's this woman I can't seem to get over.

+ Good view of the world (generally)

– Can come across as arrogant and selfish

– More than likely suffering from PTSD

There are a number of words to describe Shaw as a person. Some good, some bad. Witty, brilliant, generally good view of the world, slightly narcissistic, impulsive, overconfident and a constant need to prove herself worthy (or better than everyone). She’s also more than likely suffering from PTSD.

Despite her time in the army and difficult upbringing, Shaw seems to be rather happy at the end of the day. Either it’s her way of dealing with pain; taking things as a joke and joke around or she’s made a choice to be that way. No one but her would know the real answer to that.

There are moments where she comes across as narcissistic but not enough to be classified as a narcissist. Shaw is also considered to be impulsive, rushing into fights or arguments without thinking before acting.

Overconfidence is also a common trait, oftentimes thinking that nothing or no one can beat her, which may end up with her learning the hard way.

The strongest trait and drive would probably be her need (or rather compulsion) to prove herself. She hasn’t gotten that much attention from her parents or siblings (bar the negative aspects of it) and she comes from a big family. In short; she wants to prove herself. Which isn’t a bad thing per ce but it has gotten so far that she even wants to prove herself better than anyone, everyone. Although this could lead to her coming across as selfish, arrogant or rude, so it’s one bad thing leading to another.

* Handed: Right handed (cybernetic just above the elbow and down)