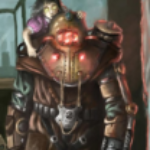 “the thinker is mine Sigma!”

Well I'm not picky..as long as they love me dearly

It is revealed that Sigma is Charles Milton Porter, the creator of The Thinker. Porter had come to Rapture after his wife Pearl was killed in World War II. Adapting to Andrew Ryan’s ideas, he met Reed Wahl, a brilliant engineer, and the two worked together to create The Thinker for certain operations in Rapture, like dispatching trains and phone calls.

Porter and Wahl began to disagree on how to use The Thinker after creating it. While Wahl used it to predict outcomes of ball games or stock prices and profit from it, Porter began to use it to replicate his dead wife’s voice. After Wahl started splicing, which drove him insane, he framed Porter by creating a fake Audio Diary that suggested he was working for Frank Fontaine. Ryan had Porter arrested and converted into an Alpha Series, while Wahl took over Minerva’s Den and became obsessed with using The Thinker to solve the ‘predictive equation’.

Like Subject Delta, Sigma’s suit has the standard features of an Alpha Series Big Daddy, including Plasmid ports in his arms and EVE tanks on his back. Sigma also has an arsenal of weapons to use along with Plasmids, including the signature Drill that Delta also wields. Sigma can also use the Minerva’s Den-exclusive Ion Laser in addition to his other weapons. Unlike Delta’s bronze colored suit, Sigma’s is mostly colored silver around the helmet and chest

Various guns and supplies for survival and equipment and gear..