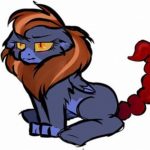 As a baby I actually wasnt human I was a manticore. I was taken in by a dragon and a Phoenix. As a kitten I struggled to understand how to kill things I mostly wanted to be friends with everything or one. As a teen people started getting scared of me. They started yell “STAY THE FUCK AWAY FROM US!” and “YOU FUCKING KILL HER YOUR GONNA FUCKING DIE!”. I was mostly doing nothing to them though. Ounce I was old enough to flee I had ran off. I ran into a wizards hut almost by mistake. I was hoping the place was empty. I stood wrong. The wizard yelled at me and said “DONT YOU FUCKING DARE KILL THIS TREE!”. He had turned me into a human and had kicked me out after a while I had found a baby Cerberus thin alone and looked like it wanted help. I took him in and I raised him (towards fluffy is added to my team ) later on in life I had opened a hotel for all species. After a while of owning the hotel war broke out in my clan I have been killing non-stop and I have … enslaved or taken in? I’m just gonna say taken in a grey-furred beast.

Money, calzone a knife and adding other living items a Cerberus named fluffy and a grey beast with no name