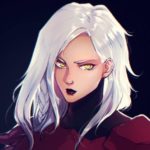 Silvia is a martial artist who acts with superhuman reflexes upon perceiving danger. Her agility and strength manifest in explosive bursts that can take one by surprise if they aren’t careful. She is a dangerous mix of instinct and skill, with a tenacity from her animal side that allows her to fight ferociously even when saddled with wounds that would be fatal to others. It is this endurance which makes Silvia a threat, enough to be considered a monster by how she will fight even when on the brink of death.

Only occasionally will she use a weapon, usually something that’s nearby. Most have a tendency to break quickly as a result of her inhuman strength and her carelessness with them. Second to her skill with hand-to-hand combat is her swordsmanship. Proficient enough to hold her own even against expert swordsmen, though every blade that she wields will eventually shatter from an overexertion as though her body itself rejects the idea of wielding a sword.

She does have a sword. One that travels to her. It is the only weapon capable of keeping up with her monstrous blows and able to adapt to her exotic fighting style.

Silvia is deeply connected with all things spiritual, enough that she can manipulate her aura (or life force) in a variety of ways. Through this aura manipulation she has cultivated a unique set of skills.