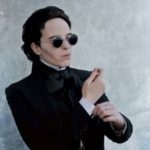 “Darling you’re already in my veins”

Thomas Sharpe was born into cruelty.
The loveless marriage between his father, James William Sharpe, and his mother, Beatrice, was a mutually beneficial business arrangement. Their lavish family estate, Allerdale Hall, was a daunting place to live: half museum, half palace.

To Thomas, his father was a shadow; a noise; an omen; a man of brutal disposition, equally terrifying in presence and absence. In a succession of cruel punishments, James would eventually throttle Thomas until he passed out, saying, “You are dead now. My disappointment has ended.” Thomas grew up nurtured by his wet nurse, Theresa, and terrified of his mother. His closest companion in the world was his sister, Lucille, who endured childhood alongside him. She was always looking out for Thomas–but her affections soon became unhealthy. When she was very young, she secretly tried to breastfeed him.

Starved of male compassion, Thomas was an introverted boy who shied away from physical, manly activities. His brutish father saw him as effeminate and a disappointment as as son–which made Thomas all the more hesitant to try to win his favor. He would reluctantly accompany his father on hunting trips to prove his worth. One fateful night, James was distracted by a flock of grouse and abandoned Thomas in the woods. Thomas was eventually found, injured and deathly ill. In that moment, Lucille decided to poison her father.

The Sharpe siblings were schooled in the attic. Thomas became good with his hands, deftly carving wooden toys for his sister and tinkering with mechanical clocks. He was fascinated by the clay-mining equipment found at Allerdale Hall. One morning he awoke early to the sound of cries coming from the clay pits. An accident had killed some of the miners, many of them just boys his age. The bodies had been covered in crimson clay and were laid to rest like bloodred angels in the snow. Thomas found the image both intensely sad and strangely arousing. One day, Lucille told him that the souls of the minders lived on, in the form of the fat brown moths that infested the attic, watching over them.

Unstable trade in the New World led to a crippling change of fortune for the Sharpe family. They lost their clay-mining business and most of their servants, along with the Sharpe children’s tutors. Without their educators and locked away from the world. Lucille and Thomas awoke to a dark, guilt-ridden sexuality. Lucille was fascinated by their biological differences, and their mutual exploration became an endless and almost feral source of curiosity. When their mother found them one morning, naked under the covers of their attic sofa, she was mortified. She vowed to separate them forever. Lucille could not let that happen, and shortly after helping her into a warm tub, split her mother’s skull with a brutal axe blow. She took Thomas to see the body, and they both waited to see if a moth would take their mother’s soul. No such messenger came.

Following Beatrice’s murder, Thomas was shipped off to live under the care of his Aunt Florence in Whitehaven while Lucille was committed to a mental institution for her crime. Reunited as adults, they would become each other’s everything. They were alone–but Thomas dreamed of a world beyond their deathtrap of al home in Allerdale Hall. He wanted nothing more than to leave the place forever. But he couldn’t–not after everything Lucille had done for him. Thomas grew into a strapping, effortlessly charming young man who attracted more female attention then he knew what to do with. He was married three times–not for love, but to make ends meet. The first wife was Margaret McDermott, an elderly widow as wealthy as she was lonely. The marriage lasted only a few moths. The next was Pamela Upton, a sickly girl in a wheelchair who fell hopelessly in love with Thomas. They were married in Paris with no one in attendance. Thomas returned from the city to find her dead. Fortunately for the Sharpes, her legacy lived on through a generous will. Finally, there was a wealthy Italian woman, Eleanora Sciottia, who Thomas found to be a kindred spirit. She was worldly, exotic, and passionate–but their love was never meant to be. With more and more blood on Lucille’s hands, Thomas became adept at looking the other way.

Thomas and Lucille were determined to restore their home and their family to its former glory. Lucille declared that wherever they walked, they walked alone. Unbeknownst to her, the rift between her nature and that of her brother was growing and tragedy was horribly close.

But so was love.