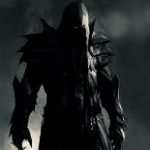 Sithis, also known as Akel, SITHISIT, Psijii, and the Dread-Father, is a deity representative of emptiness and the void. Other sources say that he is also a representation of utter misanthropy. He is worshipped by the Dark Brotherhood and many other cults.

In this realm Sithis has chosen to make himself a physical apparition that can change his form at will, but generally appears as a cloaked 8ft humanoid being or as a human male in his late 20s with pale-grayish skin, long black hair, cold blue eyes and a slight stubble.

His powers stem from his status as the embodiment of the void, mainly control over the shadows and powerful necromancy.

while proficient in combat Sithis prefers to strike from the shadows, mostly by sending assassins or undead minions to do his bidding.

Sithis mostly keeps to himself, hanging around taverns, enjoying a strong drink and studying his books or the interesting beings in the world around him.

the soul incarnate of padomay, the eternal void.

Will not be bound to one soul

Sithis originally came to this plane of existance out of curiosity, lurking in the shadows as he watched it grow and change. After a while he decided to take a physical form and experience what it was to actually be a part of it.

During his stay in this realm he has adventured, been part of massive battles, and learned that it might not be so bad to be part of the physical realm, some could say he’s even had fun.

(i,ve been here for years but also have been innactive for the better part of a year)

As stated before, Sithis can change his appearance at will but will usually take the shape of a cloaked 8ft humanoid being or as a humanoid male in his late 20s with pale-grayish skin, long black hair, cold blue eyes and a slight stubble.

He usually keeps items in a pocket dimension and as far as weapons he forms them out of the shadows as contructs, generally choosing to go for blades.

you don’t expect the dreadfather to answer that, do you?