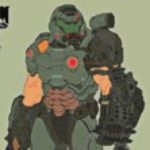 The one who tore through hell itself

Well I'm not rather picky about the gender..

He had a daughter named Daisy who was a blonde furred female bunny with blue eyes..he lost her

The Doom Slayer was originally a human from Earth (from an unknown time and place, or universe in the multiverse). He once fought through Phobos, Deimos and Hell. He returned to find his pet Daisy dead. He decided to take revenge on the demons further. He fought the monsters again, this through Earth, returning to Hell once more.

Following this, and possibly other outbreaks he was part of, he was decommissioned. Some years later he was called upon again to fight through a planetary space station (some say a return to Phobos)[1]) Again he fought the Hellish forces, back to hell. This time defeating the Mother of All Demons. He decided in order to save earth he needed to remain in hell and fight the creatures for eternity (Doom 64).

The Mother’s sister, Resurrector was not happy, in revenge she teleported him back to Earth, and tried to kill him. But he fought his way back to Hell again, he chased the sister down, and defeated her. Again he chose to remain in hell (The Lost Episode).

Before Doom (2016)
At some point, he became stranded in Sentinel Prime on Argent D’Nur after remaining in Hell. There he is captured by the Night Sentinels (or Argenta) and ended up in a different dimension (arguably the one containing Doom 3, 2016, and Eternal).

After being put through a trial by combat, where he proved extraordinarily skilled. He was later sent to the frontlines of the conquests of Argent D’Nur, where he proved once again his skill in battle. This garnered the attention of the clergy and ruling powers of Argent D’Nur, and despite being an outlander he was taken in and trained by the Night Sentinel order of knights. Despite all this, the Doom Slayer remains firmly obsessed with the demons and their imminent arrival to Argent D’Nur, and much so the demons do eventually arrive. This is when the Doom Slayer gained his (in)famous title, as he proved once and for all his skill at slaying the leagues of doom.

Praetor Suit
This armor has carried the Doom Slayer through untold horrors. Not even the fires of Hell can stop his advance.

Attachments
Deep Space Rebreather: Automatically regulates the air mixture for high and low-pressure environments.
High Impact Chest: Snaps into place on the chest to protect the wearer from high impacts.
Performance: Created for the Praetor Suit to maneuver effortlessly while in the air or in a vacuum.
Stabilizers: Helps the wearer to adjust movement while in the air.
Delta Jump-Boots: This early version of the Delta V Jump-Boots was not nearly as compact as the finished model, but the extra mass was still used to adjust movement in the air.

Badass Incarnate: Having become an icon in gaming, and battling the forces of Hell for decades, has earned the Doom Marine the status of being an absolute badass. This makes him an invincible and unstoppable force to be reckoned with.
Immense Physical Condition: Despite being human, the Doom Marine has shown to possess immense physical strength, durability endurance, stamina, and superior speed and reflexes. He outmaneuvers his opponents with great speed, avoiding their attacks, and yet is capable of enduring the hits that the Demons are able to land. His strength is sufficient to grapple and overpower superhumanly strong demons in hand-to-hand combat, and perform gory “Glory Kills” to ensure their complete destruction. After the blessing of The Sepharim he gained speed and power equal to his own will, greatly empowering him to even more impressive levels. These abilities are all augmented by the Doom Marine’s Praetor Suit and are used when fighting against the Demons of Hell.
Destruction Empowerment: The most unique thing about the Doom Marine is his ability to grow stronger and become even more tenacious with every demon he kills. According to the game’s lore, this is the result of the Seraphim giving the Doom Marine the ability to absorb the souls of those he killed.
Argent Energy Absorption: The Doom Marine can absorb Argent Energy via his Praetor Suit, which reroutes it throughout the suit’s subsystems and into his body. This allows him to increase either his Health, Armour or Ammo to maximum levels.
Rune Absorption and Usage: Through some unknown means, the Doom Marine is able to use mystic runes that he gains upon completing trials. Once a trial is complete, the Marine can then use a rune to gain new abilities.
Powerup Usage: Whereas powerups (such as Berserk and Haste) in the game are described as killing or driving human users mad, the Doom Marine can use these without any trouble, sustaining full control and not taking any damage to either his body or mind from using such artifacts multiple times.
Expert Combatant: The Doom marine is a highly trained and experienced combatant, even when lacking ammo and weapons, he can slay demons just with his bare hands alone, without the need of any melee weapon, he can defeat and tear apart demons far bigger and stronger than him just with his own skills in hand-to-hand combat. Thanks to training with the Night Sentinels he became quite disciplined and became able to focus his rage and became proficient with swords and spears. With the Praetor suit, these skills are far increased, making him a monster in both armed and unarmed combat.
Weapon Mastery: The Doom Marine is capable of using any weapon or firearm in his possession with master proficiency. He can use all firearms he comes across with great effect, while also upgrading and modifying his arsenal. He is also capable of carrying a vast amount of weapons, carrying up to 12 weapons including special weapons (Chainsaw and BFG) and grenades. Also able to use swords and other bladed weaponry equally effectively due to his training and crusades with the Night Sentinels.
Advanced Intellect: Hailing from a technologically advanced civilization, he is able to use technology from other worlds with no signs of unfamiliarity, despite resorting to violence.
Transcendent Human Physiology: The Khan Maykr states that the Doom Slayer was once a mortal so it is safe to say that the blessing of the Seraphim has transcended him to become something more than a mere human.