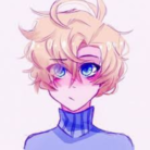 Francis Aiko Beckett was born in a family of.. Well, not so accepting people. He was often shunned for his likings, told to like more masculine things. But he didn’t WANT to be masculine. He liked being.. Well, feminine. This was probably a result of him, first liking males. He discovered he liked boys in a love way when he was 13. And it showed. Francis already had a very feminine body, his hips quite wide though his chest, of course flat. However, even though he had this body, and felt more feminine than other boys, he did not embrace that until he was around 16. Sick of being sheltered and told who he HAD to be, Francis told off his already abusive parents, and tried to runaway. Unfortunately for Francis, he was unable to run away, thus living a terrible life until he was 18.

But what about the stuff that happened in between his failed escape and final escape? Well, hurting to say, Francis was physically and mentally abused by his homophobic parents. The poor bunny boy was beaten and talked horrifically to everyday. As for his rights and clothing choices at school? His parents forced him to wear male clothing, but Francis always packed female clothing so he could change once he got to school. This was a good tacit, as his parents never found out.

As soon as he escaped from his parents house, he realized there was no place for him to stay. So, upon not finding a well paying job, he resorted to a male strip club. That is where he works currently, and he is paid quite well there too. Though Francis would never tell people that is how he lived, I should warn you now.. You can catch Francis in a few ways. Number one: At his job (unlikley), Number Two: Francis is a lightweight drinker, and when he gets drunk you he may strip, and Number Three: When doing the dirty with Francis, it becomes clear he is a stripper.

Beyond being a stripper and coming from an abusive past, Francis is extremely kind and well-minded. He is a little shy when you first meet him, and very easily embarrassed. It’s the cutest thing! He is always open to talk to, and is a great listener. Tending to comfort others, Francis himself tries his best to keep himself mentally afloat as well.

*Francis is part Bunny so he often has his bunny ears and tail poking out, enhancing his femininity*

Narrator: Francis is such a femboy… *Mega Facepalm*

Being that Francis appears as the common femboy, it is a quick assumption to assume he’s either bisexual, or gay. And, in fact, he is gay.

“Oh.. I’m sorry but I feel uncomfortable sharing those…”

"I'm not too sure about that myself.."