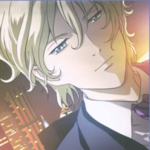 active 2 weeks, 5 days ago
Base

Solomon Goldsmith was Diva’s fourth chevalier. However, he later betrayed her in the hopes of securing Saya’s love.

Solomon was a blood relative of Amshel and thus related to the Goldschmidt family of France. Youngest of the Goldsmiths, his family wanted him to enter the military during the First World War to further expand their powers, though they had established many banks and businesses at the time. But wanting to help people in need, Solomon went into the medical field and though he didn’t directly participate in the war, he became a military doctor instead. However, because of what he witnessed during this time, the constant bloodshed of war terrified him and he wanted a war-free life.  He was introduced to Diva by Amshel in 1917 during the Russian Revolution. At this point he agrees to become a chevalier as he wanted to free himself from seeing humans kill each other, and hoped that peace would prevail. But afterwards, he started seeing humans as insignificant and beneath him. Though as time passed, he realized the world of the chiropterans is just as full of war as the human one. Because he was wearing white at the time, it is the only color that Solomon wears as it is a symbol of him being Diva’s chevalier.  That same year, Solomon later helped Amshel to bring in and forcibly turn Karl into Diva’s next chevalier; feeling guilty for the pressure on Karl’s mind that the forced conversion has created, Solomon decided to watch over Karl and forges a brotherly bond with him. During the Second World War, they both served as officers for the Allied Forces. In 1945, he is ordered by Amshel to execute Martin Bormann, Diva’s third chevalier for unspecified reasons. Many decades later, he eventually becomes head of Cinq Flèches Pharmaceuticals and leads the company as the most successful CEO for five years.

Solomon is of French descent and one of the most charming characters in the series. Owning handsome attributes like a kind, gentle smile, he is shown to be the eye-catcher of every woman in any gathering. Retaining the appearance of a young man in his early to mid-20s, he has pale skin, light green eyes, and wavy pale blond hair. His ever smiling face displays his peaceful nature. However, his eyes turn glowing red whenever he gets serious and fights using his chiropteran abilities while in human form.

Solomon has blond hair falling over his shoulders and glowing red eyes while in his chiropteran form. Unlike his brothers and most chiropterans, he doesn’t posses a maw of razor sharp fangs, instead owning very few small sharp teeth. He has dark beige skin, long pointy ears, and bat-like wings that are reminiscent of a wyvern. He uses his full transformation twice: rescuing Saya and Kai from James and fighting with Hagi in New York. Normally, he uses a partial transformation of his right hand to fight, which starts from the fingertips and transforms into a bluish blade.

Personality
When first introduced, Solomon is depicted as a true gentleman; polite and always friendly. Seemingly cheerful and light-hearted in nature, he is always calm and unlike most of his brothers, rarely serious. As the series progresses, he is shown to be quite reluctant, especially where Amshel is concerned and has many regrets taking orders from him in the past. Possibly due to witnessing the horrors of war, he has an aversion for fighting, claiming it to be unnecessary. Because of this, he is typically a peace-loving person and wishes for a war-free life.  However, despite being polite, he is rather secretive, and will not avoid being disagreeable. He is also very dishonest and seemingly manipulative as evinced when he confronts Saya at the Zoo. In spite of his great distaste for violence, he will only fight when necessary. Though he often holds back at first, he is extremely ruthless and sadistic, making certain that his opponent is truly dead. He appears to not like things being kept from him, especially where his older brother’s plans are concerned. Solomon also seems to possess a streak of indecisiveness as he is at conflict between preserving the interests of his family and protecting Saya from them.  Because of his previous life as a doctor and his desire to help people back then, he is compassionate and caring, mostly towards Karl and Saya. He seems to be a bit assertive, too forward even when he prevents Saya from running away and later asks her to be his bride. Despite his usually calm nature, he is seemingly emotional, especially later on in the series. It should be noted that the above personality reference is based on how he is in the Anime as in the Manga he has a more dark personality as he is more of a Sadistic individual however that being said I’ll probably lean more towards rping his personality in the Anime unless someone wants me to rp the dark twisted personality he had in the Manga.

Skills:
Medical Skills: Once a physician in his human life, he did war service as a military doctor. But after becoming a chiropteran, he need not perform this skill. However, he uses his skills to aid Saya once she impales herself with her own katana to kill Karl. Solomon draws out her sword with medical precision so as to avoid inner organ damage.

Business: He proves himself to be the most successful businessman in decades with his achievements as CEO of Cinq Fleches as Julia notes that he has an impressive resume.

Lady Charmer: Despite his reluctance, his appearance and charming manners never fail to catch every ladies’ eye in any vicinity.

Dancing: Possibly due to his upbringing as an aristocrat of the Goldsmith family, Solomon is an accomplished dancer and even mentions being told that he was one by his big brother.

Solomon’s strength outmatches those of Karl, Martin, James, the Schiff and regular chiropterans. He is also driven by willpower when he fights James to save Saya in his human form even though he lost a large amount of blood through the injuries inflicted by Diva.

Speed: Solomon has a certain extent of speed as a Chevalier surpassing that of the Schiff easily. As well as when he catches-up to save Saya and her brother Kai from James as they fell from the massive trap hole.

Telepathy: He is able to perform telepathic communication with other chevaliers as shown when he restrains Karl from continuing to fight with Saya in Vietnam.

Transformation: He fully transforms when rescuing Saya and Kai and fighting with Hagi. He mostly uses his partial transformation of his right arm.

Regeneration: Like all chiropterans, Solomon’s body is able to heal any wounds inflicted, no matter how severe, and is also able to reattach severed limbs.

Shockwave Attack: Despite using this ability only once, Solomon can send a burst of energy with a swing of his transformed arm.

Usually speaking just his sword like arm & medicine in his pocket incase he runs into Saya or another person he knows that needs help.