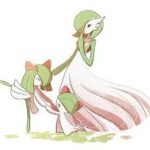 Ralts is a humanoid Pokémon with a white body. It has thin arms and legs that widen toward the feet. There is a wispy extension trailing off the back of its feet, creating the overall impression of a nightgown or oversized dress. Most of its face is covered by green hair that resembles a bowl cut, but a pair of pinkish red eyes is sometimes visible. There are two flat, red horns on top of its head: a large one toward the front and a smaller one at the back.

Ralts uses the horns to read people and Pokémon’s emotions. Warm feelings cause its body to warm as well, but it hides if it senses hostility. If its Trainer is in a cheerful mood, Ralts also becomes cheerful and joyous. It is known to inhabit urban areas, but it does not normally show itself to humans. However, when it senses happy feelings, it will approach people. 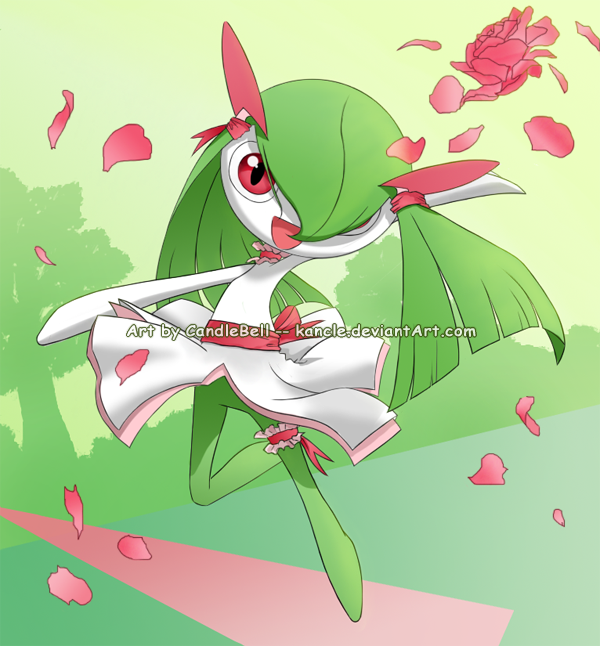 Kirlia are a bipedal, humanoid Pokémon that appears to be wearing a tutu. Most of its body is colored white, and there are three ruffles on each hip. Beneath the ruffles, it has skinny green legs with long, pointed feet. Its arms are also thin with two digits each. It has green hair that covers most of its face and reaches its shoulders on either side, resembling two ponytails. Large, red eyes are visible on either side of the hair that covers its face. On each side of its head is a flat, red horn that resembles a hairpin.

Kirlia’s horns are used to amplify its psychokinetic power and distort the air around it. The distortion in the air causes scenery mirages and can cause a rip in dimensions. This ability also allows this Pokémon to see into the future. It enjoys dancing on sunny mornings, and grows beautiful when exposed to a Trainer with positive emotions. Kirlia inhabits urban areas. 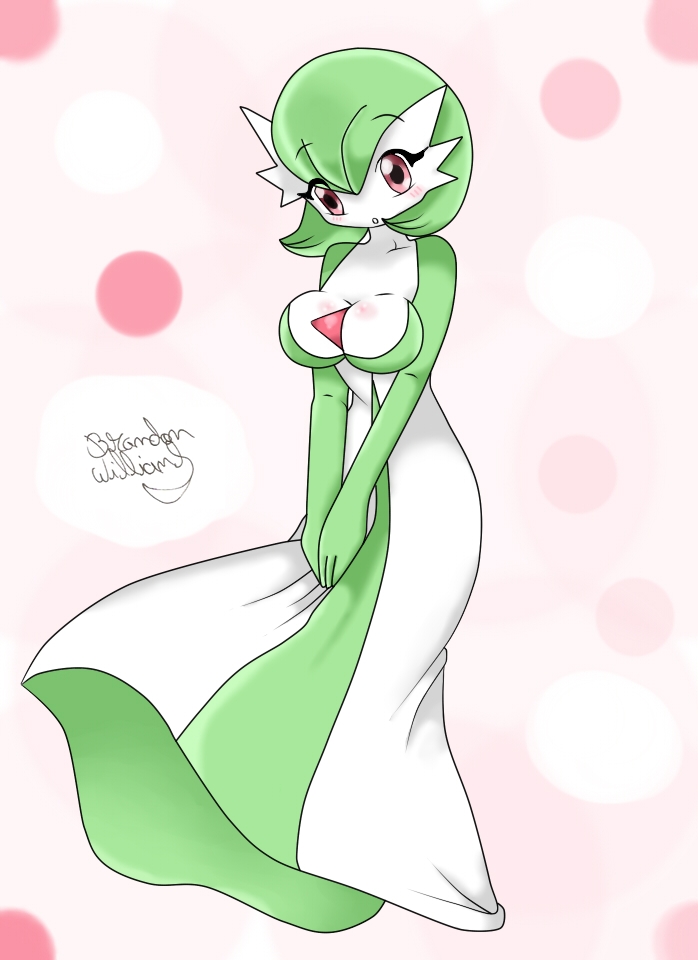 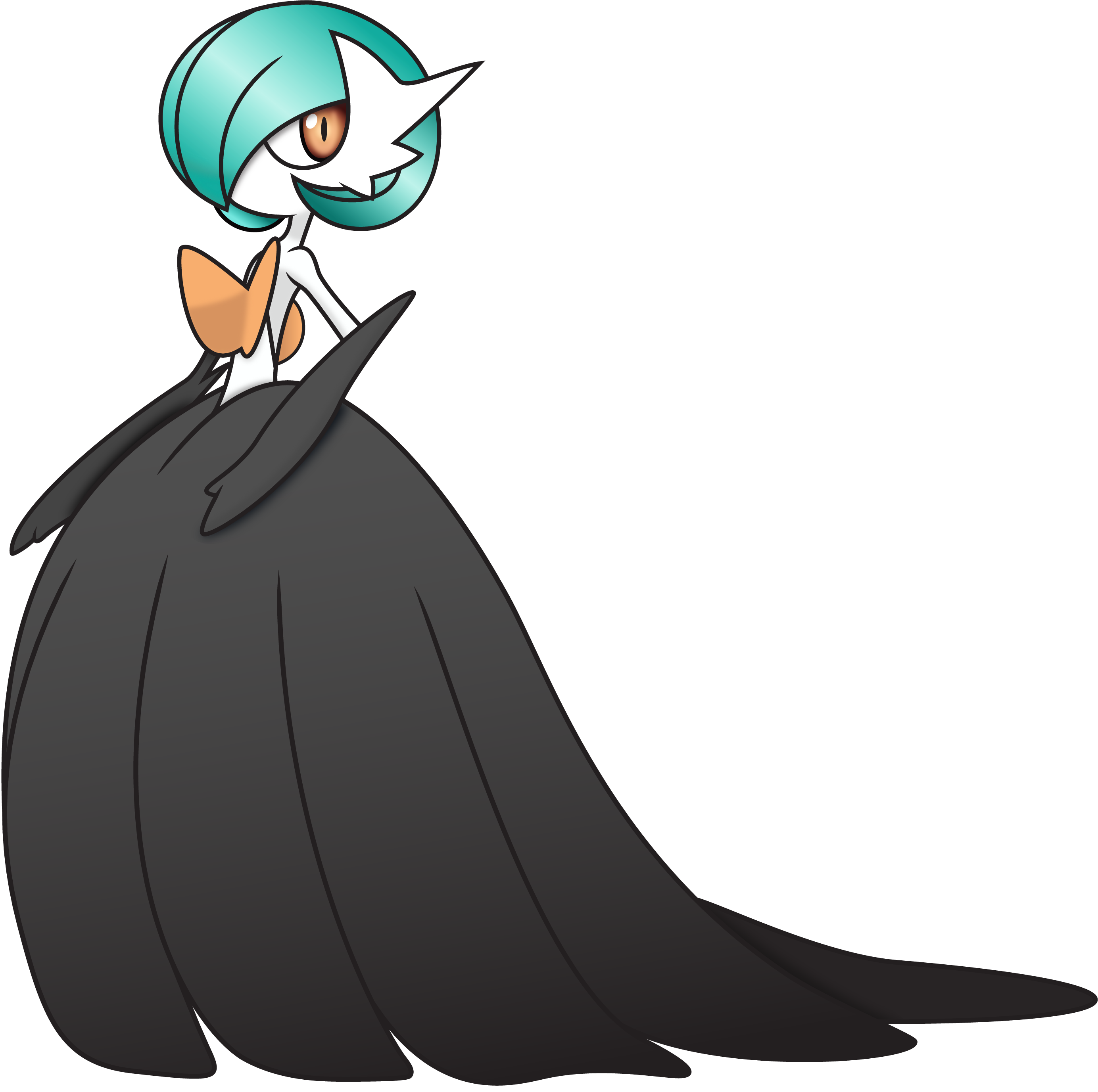 Gardevoir is a bipedal, humanoid Pokémon whose body resembles a flowing gown. Most of its body is white, but its hair, arms, and the underside of its gown are green. Its hair curls over its face and down the sides of its head. Behind its red eyes are short spikes, resembling a masquerade mask. It has long arms with three fingers on each hand and slender white legs. A red, fin-like horn extends from its chest, and a shorter, more rounded horn extends from the back. A band of green on its chest extends to the center of the front horn and connects to its sleeve-like arms.

As Mega Gardevoir, it turns almost completely white; only its hair remains green. Its gown becomes longer and wider, resembling a bridal gown. The forearms are slightly thicker with a pointed extension above the elbow. Its facial spikes are larger and now curl upwards. In contrast, its hair is now shorter and more tightly curled. There are now two horns in the center of its chest, extending to either side. These horns are said to be a physical manifestation of this Pokémon’s heart, and it is able to use tremendous psychic power now that it is open.[1]

Gardevoir is able to see the future using its psychic powers. Additionally, it is able to create small black holes, distort dimensions, and support itself without feeling the pull of gravity. Its power reaches its peak when protecting its Trainer, whom it will protect with its life. This Pokémon inhabits urban areas. 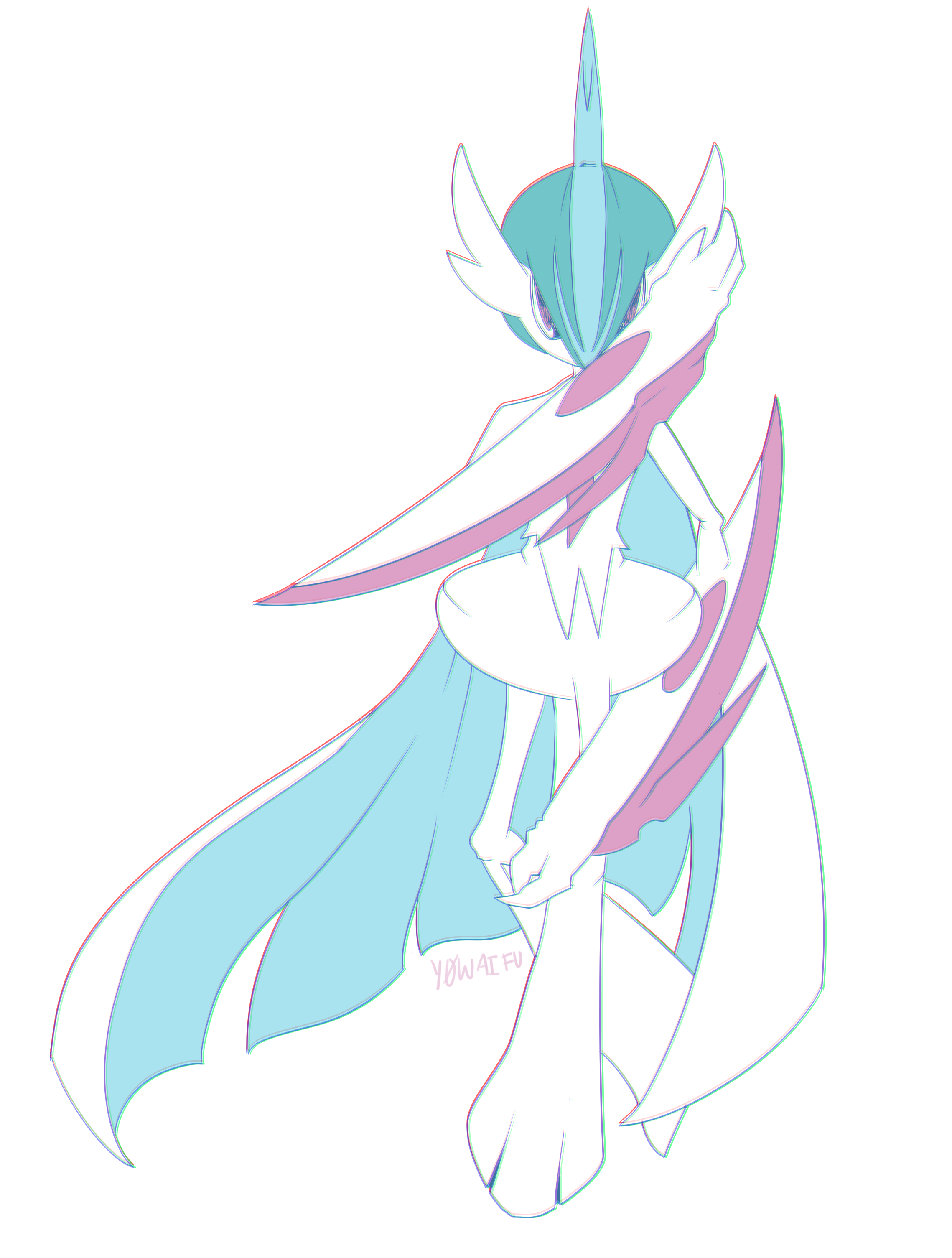 Gallade is a white, bipedal Pokémon. Its lower body consists of rounded hips with strong legs. It has a thin green torso with sharp, red horns sticking out of its chest and back. Its arms are shaped like tonfas with extendable blades in its elbows. Its head resembles a gladiator’s helmet with a white face, red eyes and a teal head crest. It has spikes on the sides of its face.

It is a master of courtesy and swordsmanship that is capable of predicting its foe’s moves. True to Gallade’s honorable warrior image, it is just as protective of their Trainer as its female counterpart Gardevoir, using the blades on its elbows to defend. Gallade is known to be sharply aware of a person’s wish for help and seeks out those who needs its assistance in battle.

As Mega Gallade, its entire body becomes white. Red plates emerge on its arms, the blue head crest is slightly longer, and the spikes on its head are elongated and gain two cape-like protrusions on the back, this giving it a knightly appearance. When the situation demands it, Mega Gallade can use its psychic power to reshape both arms into blades simultaneously and fight using a dual-wielding style.