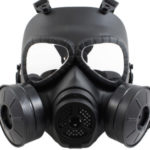 Fear him.
For he does not fear you.

A retired Navy soilder. That has to come out of retirement.

Born, and raised in North Carolina. Moved to Florida. Micheal have lived a normal life, due to a war. Micheal have been drafted upon a war. Micheal have went on to serve his country, and finally after 4 years of service, and respectfully discharged the course of life have taken its place having him have a family, two children, and a wonderful wife and family. Until, the revolution started, demons invaded the earth. His wife, killed. His children, dragged to hell. As demons dashed into the house Micheal, heartbroked, filled with rage reached upon his gun. It was simple, said and done. Micheal done filling the heads of the demons with metal and pain. He ventures off into hell to find his children.

Blonde hair, something of a slivery tone.

A muscular upper-body, with strong quads due to the extra-exdordinary demon hunting.

Micheal has a 3 hole gas make, with each breather angling at the forward of the face, and his cheeks.

He has unimpenetrable armour he have obtained from hell.

Shoulder pads that has large spikes penetrating from the edges.

Heavy combat boots with Mach 10 rockets upon the bottom, it ties with the armour.

A unbreakable knife that can pierce any armour.

=Redemption=
A high plasma ray gun, hotter than the sun that can melt through titanium.

=End=
A double handed shotgun, with bullets forged from the complete fires of hell.

=Gates of Hell=
A small double handed machine gun, that can be coked and fires 3000+ rounds per second with fast reload time. This is made out of hell fire.

A suitcase.
This holds his armour, and he carries his weapons.

The demons shall meet their DOOM. As I am their redemption.