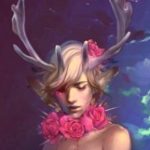 Personality: Through the years Stag has gone through many changes in his personality, where warmth used to reside is now a cold and bitter. His patience, depending on his mood is now thin and he turns quickly to aggression. Despite how well he tries to keep himself together, abuse has left him emotionally fragile. Stag hates himself and hates who he has become..

But despite all of this, Stag still holds onto that thin thread of hope that someday he will be himself again.

"I am Stag of the Forever Forest. The Faun King and guardian of all that lives."

"I have them, but it's none of your business."

Stag was born on Utopia in a time of war, his kin killed of to nothing but him, at least that is what he thought. Stag fled Utopia after the slaughter of his friends and family, ending up in an unknown world filled with strange people. He quickly made friends and even started a romance. With the help of his new friends he returned to Utopia and found Alder, the only remaining faun besides himself and the infant son of his adoptive mother, Kikyo.

Trouble arose the faun soon lost his love, leading him into what was only the beginning of a string of affares. Relishing the love and affection he got from others, making him feel wanted and filling the void of pain that just kept growing. Around this time is when he met Matias, a wolf mage from Sanctuary. They became mates and a child was birthed from a pool of mana that they named, Xen.

Stag eventualy grew violently ill, as the sole guardian, Utopia was draining him to keep itself alive, much like it did to the last king. Without the other guardians he would likely die. He sought help from his friends, but only gained help from one he most despised.

So a deal was made with Jango, and as payment for the rebuild of his people he would become a pet. A slave to the man where he was tortured, flogged, raped, and forced to harm and kill under the rein of his master. His mind was broken apart, leaving him reserved from his friends and even his children. He didn’t wish anyone to see how far he had been brought down. Stag eventually developed an affection for the man and they had a child named Zenon. Around the same time Stag took a child from a dying friend who he affectionately named Annabelle.

He remained a slave for over two years until he finally begged and demanded that the deal be finished, and so it was. His kind was returned and the faun was set free, left alone with his children and his restored homeworld. But the ordeal has left Stag broken, depressed, and numb. A defeated shell of the faun he used to be.

General Appearance: Stag has 10 point antlers and downward curved ears, he is also 6’6″, 7’6″ if you count the antlers. He has a 6″ tail, brown on top and white on bottom. From his head to nearly his waist is human like in form save for his ears, of course, being caramel toffee in color. Around his eyes is black like eyeliner and so are his lips, his fingernails are black, and he has a dark stripe from his neck, all the way down to the base of his tail. He has white spots on his shoulders, thighs, back, and cheeks. He is very feminine in appearance and is often in a short red dress made of large rose petals with the bodice laced up the back with ivy. His hair is done up with flowers and ribbons and he has a silver crown that laces around his antlers and across his brow.

Human form: Stag has toffee caramel colored skin with pure white freckles dotting his body, black lips and nails and a solid black outline around his eyes like eyeliner. Across his chest are three scars. He stands just a little shorter than his faun form at 5’8”. His human clothes consisting of a green bow in his hair, a suit, dress shirt, tie, dress shoes, and socks. His powers are still in effect during this form.

Nightmare Stag: The Nightmare is over.

“I have no secrets. Ask me anything.”

"Anything breaks if you push hard enough.. But just because it's broken.. doesn't mean it can't be mended."