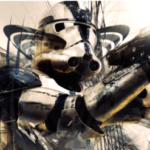 active 2 years, 2 months ago
“It’s been said that the 501st got the best of the war. We also got the worst. On Felucia, the Seps dug their metal heels into the muck of that alien hellhole and dared the Republic to come in after them. So we did, only to be met with the month after month of flesh-eating diseases, shrieking nocturnal predators, and other sights that haunt me […] View

“What I remember about the rise of the Empire is… is how quiet it was. During the waning hours of the Clone Wars, the 501st Legion was discreetly transferred back to Coruscant. It was a silent trip. We all knew what was about to happen, what we were about to do. Did we have any doubts? Any private traitorous thoughts? Perhaps, but no one said a word. Not on the flight to Coruscant, not when Order 66 came down, and not when we marched into the Jedi Temple. Not a word.”
-Journal of the 501st Through out the clone wars, they have produced a great many of heroes in combat. Many of which have fallen.. They are led by Anakin Skywalker (who would later become Vader). When he is not in command, it is usualy General Kenobi (Who would later be considered a traitor..). On the top of their hierarchy of troops, there is clone Captain Rex. (Who would later join the Rebels against the Empire..) They are heavily distinguishable by the blue markings on their armor.

They were Vader’s first. They were the one’s who Vader led into the Jedi Temple to slaughter the Jedi within.

In the end, they were also the only clones left after the Jedi had fallen. They led mission after mission with the Republic, and the Empire. They went through every hell war has to offer. They even saw the Empire’s last victory on Hoth. A Venator class frigate entirely comprised of nothing put members of the 501st (Save Admiral Chine) had made a simple error in their hyperspace co-orients. An error that brought them to Hellifyno, and it is sadly keeping them there…. Soon after the Admiral Died of old age, they are left with Clone Captain Vin being in charge. With this, he has made multiple offers to the people of Consequence, mainly to help out.. Secondly, to make sure that his fellow brethren have a place to call home in this new galaxy..