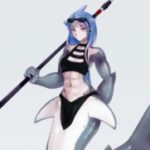 A race of mermaids with the characteristics of sharks. These monsters are extremely ferocious, just as they look, which is a rarity for the mermaid family since most of them have a docile disposition.

They have excellent senses with which to detect humans, and they can accurately pinpoint the specific location of a man hiding in a ship. Because their senses are excessively keen, detecting a man’s presence will even cause them to perceive a man’s existence so incredibly strongly that they go wild with lust. If they discover a man who fell into the sea, they’ll mercilessly snap at him and try to greedily devour the man’s body. They don’t actually consume such prey, but because of how they look when they attack humans, they are feared as “man-eating sharks”.

They have sharp fangs and strong jaws, and it’s said that they are even capable of biting through iron chains and gnawing holes in the bottom of ships. On the other hand, since their fangs contain mamono mana and have the same properties as mamono realm silver, they do not injure humans. Those bitten have mana spill out from inside their body instead of blood, and when a man’s mana mixes with their mana, it becomes stained bright red; instead of a blood spray, a mana spray will stain the sea red.

Once bitten, a man will be robbed of mana and feel like he’s having his mana gouged out and consumed instead of his flesh. The instant he is bitten, a man’s body will be attacked by a throbbing so violent that it’s almost enough to render him unconscious, plus there’s the continuous heat and oozing of mana afterward, so a man will be robbed of his freedom underwater and be unable to escape from copulation.

They prefer to embrace and entwine each others’ bodies as closely as possible during sex, and they will ride a man wildly as if devouring his penis to welcome it deeper in their womb. Additionally, their “shark skin” has rough scales with the same properties as their fangs and when it scrapes against a man during sex, it constantly produces throbbing and heat throughout his whole body. A man will be unable to go without venting it inside them, and he’ll end up repeatedly ejaculating over and over.

Although they are ferocious monsters in this way, they actually also have a timid nature, which becomes strikingly apparent after obtaining a husband. During intercourse, they often nibble their husband’s body, but the reason for this behavior is that they dislike it when their husband separates his body from theirs. On such occasions, they can be put at ease by head-patting or a firm embrace.

Also, perhaps because in the age of the former mamono lords their entire body, including fangs, shark skin, etc., was a deadly weapon for wounding humans; other than during sex, they treat their husband gently and carefully as if he were a fragile treasure. You could even say they appear over-anxious, and they will turn their ferocity towards anything which could potentially harm their husband.

Furthermore, among the humans who fear them, it is said that the scent of blood draws them near. They actually are sensitive to the scent of human blood, and if there’s a human bleeding in the sea, they’ll swim there at full speed even from a far away location. However, it’s not to attack, it’s just because they get worried and rush to come help. Supposedly, sometimes they may even show up faster than the “sea bishops” who save those who are drowning.

Spear made from scrap metal from wrecks