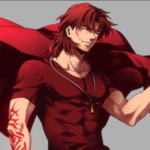 A lone Saiyan searching for that which had been lost.

Strata was born to a branch of royalty, this aided in shaping how his early years would play out, in the level of training and education that would be given.. forced.. upon him. Taught and molded to be not a simple soldier who followed orders, but to be a commander, one capable to planning, and adjusting to changing conditions as needed. Had it not been for the desolation that his people suffered that would have been the outcome, however as his people were scattered to the stars with the death of their civilization, his path would change.

Crimson hair
Dark blue eyes
Scar running along the left side of his face, from just above his eye, down to his cheek
Muscular build, more in line to physical strength, and actual combat effectiveness.

there is importance in strength, wisdom in honor.