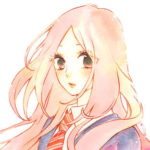 Suiren is a simple mage who’s managed to live her life normally for the most part. She was born and raised on Hellifyno. Though being a powerful mage, Suiren is more found as quiet and gentle.

Suiren is selectively mute, meaning she doesn’t speak most of the time, but rarely speaks when she chooses to. Mostly, she gives nods or shakes of her head. But with people who she considers as close, Suiren speaks. Just quietly, although. And barely.

Suiren has light green hair accompanied by green hues. She also has a petite figure and stands at 5’1.

A small, portable staff that can shrink of expand for better handling and carrying, along with a few books filled with spells that she carries in a satchel.