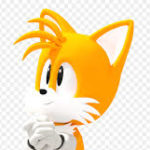 Hello I am Tails Prower! Aka Sonic’s sidekick

I am Tails Prower?

Before I met Sonic, I was apparently an orphan who thought I was a bird because of my ability to fly; it was me being kicked from a nest that introduced the two and led to Miles receiving my nickname “Tails”.

I’m is a young, male, golden-yellow, anthropomorphic fox with two tails (similar to the mythological kitsune, or “yoko”, which was often depicted with up to nine), hence the nickname. I am able to use his two tails to propel myself into the air like a helicopter for a limited time.

Don’t ask me that!