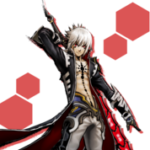 Appearance
First Form
Haseo’s initial form is a Twin Blade. He has red eyes, shaggy silver hair, an exposed midriff and wears a black leather wardrobe. His shoulders are decorated with wave tattoos and the marks on his face are shaped like red lightning bolts. Second Form
For his second form his midriff is now covered and additional bronze-like metal plating was added to his arms and hips. He also has a metal decoration on his back. The marks on his face are jagged with a straight line underneath. In this form, he gains access to his Edge Punisher job. This is also the form in which he first awakened Skeith. Third Form
Haseo’s appearance changes drastically in his third form (he is quoted as looking “awesome” by Silabus and Gaspard after completing the Job Extension quest). The bronze-plating components are now gone, in their place being spiky black and red-gradient tipped protrusions littered all over his armor. His torso and abdomen are now once again no longer covered by armor, now covered by a tight, leathery purple piece with a red tattoo on it, akin to his initial 1st form. His facial marks are two curves on his cheeks, each with multiple juts coming out as they run down his face, likening to scars. In this form, he gains the ability to use his Flick Reaper job, Weapon Change, and Skeith the 2nd. 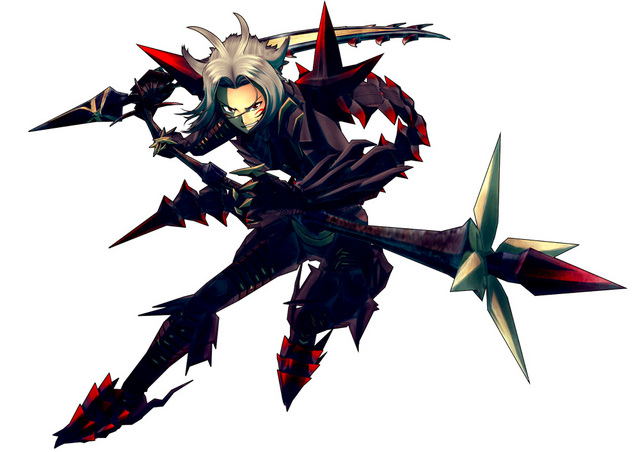 Xth Form
During Redemption with help from Zelkova, Haseo unintentionally breaks system rules and communicates with his Avatar to obtain a fourth Form. Unlike previous forms, Haseo has gold eyes (although they remain red during game play), wears a white striped shirt, pants and has various plates scattered over his arms, legs, and hips. His shoulders are bare and have gear shaped symbols on each side. Similar to Kite there are triangularly shaped marks on each side of his face. The Xth Form gains the ability to use Skeith the 3rd, drain heart and dash. The initial weapons he is granted with are a pair of dual guns, the DG-X (in reference that they are dual guns, and come with the Xth form).

Fifth Form
In Volume 4 of Last Recode, Haseo obtains another form known as 5th form. After the events of Volume 3, Zelkova seals Skeith, removing it from Haseo’s PC, since he believes it is too dangerous to leave Skeith with the power of all the Epitaphs, stating this could cause Cubia to return.
After a mysterious monster known as Shadow Vegalta attacks the Net Slum Tartarga, Zelkova unlocks Haseo’s full potential, by giving back Skeith, as well the power of all the Epitaphs it absorbed in the form of a weapon known as Gate of Ouroboros, unlocking his 5th form.

Personality
Haseo is a cold person, but holds a soft spot for Shino. He finds it hard to get close to people. Though not as warm, he is a great leader and is willing to risk everything for his friends. When Shino was attacked by Tri-Edge, he stopped at nothing to find out what happened to her and tried get his revenge. As he progressed, Haseo learned to trust his new friends and grew as a person. Also despite his profession as the “Terror of Death” in Roots, Haseo hates rumors and forums, disdainfully calling it “idle chatter”. His preferred sources for information are PKs and “professional victims” like Bordeaux and Midori, respectively, as they are far more likely to encounter the mysterious PK, Tri-Edge, than the rumor-mills on the BBS. 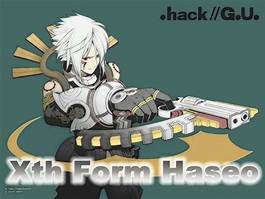 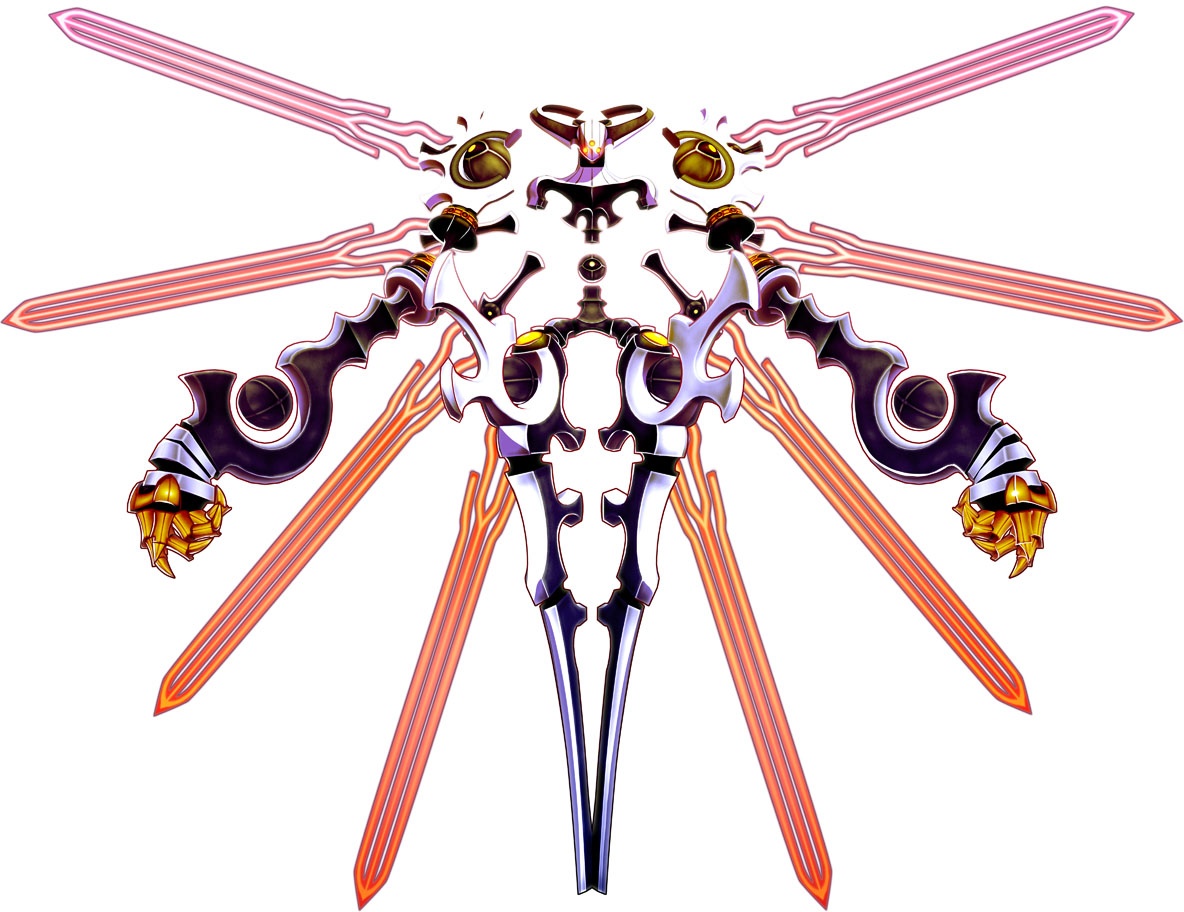 .hack//G.U. After Story
.hack//G.U. Returner
Haseo receives an email from Ovan simply stating “There is something I wish to entrust to you. Come to ? Hidden Forbidden Festival.” Upon arrival, Haseo finds a summer festival setting, as well as Shino and Atoli having a conversation about him. They tell Haseo that Tabby and Sakisaka have already arrived, but have run off in search of Ovan, to which Haseo responds by calling them “Just as impulsive as always.” He agree’s to go with Atoli and Shino to look for them, only to find them, along with Endrance and Saku, being attack by an abnormal monster. 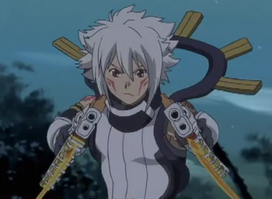 Haseo succeeds in defeating the monster, only for it to deflate into a puddle and become a mysterious looking Chim Chim . Haseo attempts to kill it, only to be halted by Shino, who claims the Chim Chim has something to say. However, the Chim Chim can only be understood by Atoli’s mysterious hearing ability. Using this ability, it is revealed that the Chim Chim is actually an AIDA. This surprises Haseo, as all AIDA’s should have been destroyed by Ovan’s Rebirth, the skill used by his Avatar in Redemption. The AIDA Chim Chim then explains that only the AIDA that was not adapted to “The World” was destroyed. It is then explained that “The World” has accepted AIDA and that only benevolent AIDA remain. Haseo refuses to accept this, and still sees AIDA as an enemy that put so many players into a coma. He prepares to attack the AIDA Chim Chim, but has a change of heart after Bo explains to him that the AIDA have changed their ways and asks Haseo to understand that AIDA is no longer an enemy.
All the characters return to the now active Summer Festival where Haseo enjoys the festivities with friends old and new alike. Later, Haseo is found by Shino to be sitting down watching the festivities from a distance, when she asks Haseo what he thinks of the message left behind by the AIDA Chim Chim. It is then revealed that after Haseo decided not to attack it, it took the shape of floating letters, spelling out the word “RETURNER”, which is believed by the characters to be a message from Ovan. Shino tells Haseo that it means “someone who has returned.” Haseo shows doubt, saying that it isn’t neccesarilly Ovan. Shino simplifies the situation to Haseo by saying that the AIDA came and left a message in a field where they were specifically invited by Ovan, and that it would be odd if the two weren’t connected.
Atoli arrives, and asks Haseo is he is scared of the disappointment of the possibility that Ovan may not have returned. Tabby pops out from behind Haseo, and says that it looked that Atoli guessed right. Haseo is flustered by this, but is reassured by Shino and Tabby that Ovan if full of pleasant surprises and he wouldn’t betray Haseo’s expectation. Atoli asks Haseo what he would say to Ovan if he came back. After some thought, Haseo stands up and says “Welcome back, Ovan.” At the same time that he says this, Ovan is reunited with Aina.