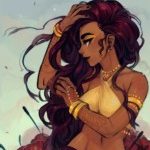 “in the beginning, mythology was just mythology. A thing from story books to help children fall asleep, and entertain those with a burn for knowledge. Never was mythology brought to life, monsters made real, gods walking among us, that wasn’t real. Well, at least for most of us.

“Some of us, we’re given a jolt, and icy glass of water thrown in our faces to awaken our senses, better our sight, and broaden our views of the world. That’s what happened to me.

“Hi, I’m Bakira Nitari, and I am descended from the gods. A godling you could say. Did I chose to be this way? Nooo, but it just happened. Sort of like you don’t ask to feel hunger, it just happens. With it, you feel incomplete, insatiable, always needing more.

“That’s how I felt before I was awoke. Before I learned who I really am, I was just Bakira, a fifteen year old wondering why my dad was dead and my mum was so afraid of the world. Sadly, it took my mum blowing herself up to awaken my senses.”

Bakira wasn’t normal from the start. She sought out fairy tales, followed the yellow brick roads, let her imagination play, and believed in everything. From the boogeyman to the werewolf of feverswamp, she assumed them real.

“The world is many, many realities Kira, you just have to figure out which you chose to live in.” She used to tell her. And then she died. Died trying to avenge Bakiras father Carter from his early death, blowing herself up after trying to imprison an Egyptian God she’d accidentally summoned.

Set, evil to the core, he’d fought until she’d literally burned from inside out, and then went after her daughter Bakira. Luckily, a goddess named Bast, she was able to save the girl. Shielding her from the world, while teaching her to fight. Readying her for a battle with Set.

But even Bast couldn’t protect her for long. Bakira engaged Set in rage. They fought, spell for spell, wit for wit, yet in the end it wasn’t good enough. Bakira was killed, broken by Set, and Bast was sent to an exile.

By chance, their souls met once more. Jubilant, eager to avenge Bakira, Bast possessed the girl, and gave her pieces of her soul. Those pieces live on within Bakira.

Part God, part human, Bakira is a godling with extrodinary powers such as divination, clairvoyancy, shapeshifting, and many more. But she doesn’t remember anything from her last life. Nothing. She believes she is actually Bast, sent to Earth to right her unknown wrongs. So, on Hellifyno she resides, ignorant of her true childhood.

Bright, amber reddish eyes, with caramel colored skin. Golden tattoos like woven silk winding along her entire body. Dark red hair, the color of fire, curly and long, falling past her hips. A pixie like face, yet ruggish as well. Lithe, graceful, catlike. Standing at Five foot two, a hundred and twenty pounds.

Sometimes, when in a separate reality, she can appear with the head of a cat, true to the Egyptian depiction of Bast.