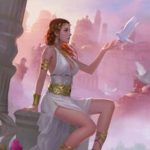 rules to write with me

A ragtag family of gods

age: she had been around since the beginning of time

personality: Reyna is viewed as the leader of the group. she is battle wisened, calculated and ruthless. Her enemies fear her, and even her friends are weary.

age: as old as Reyna

personality: Astrid is the level headed one of the group. Merciful, shy, and sympathetic, her easy trusting nature has gotten the group in trouble a few times

age: eleven thousand or so

personality: like her element, Ashis reckless, chaotic, and uncontrollable. She has strong beliefs in right and wrong, and often sees the world in black and white.

romantic interests: despite her assertive personality, Ash likes to betaken care of. She likes leaning on her partner and being put in her place so to speak. She is herterosexual, and has always preferred men.

age: older than both Astrid and Reyna (born before the universe)

powers: dream manipulation, empathy/telepathy. She speaks for lost spirits and oversees their judgments, ensuring their fairness.

personality: shes the voice of reason. The mediator of the group, though she can only speak through thoughts, and only after being given permission. (This means that if you are interacting with Serenity in the main, she will not speak to you unless you give her permission)

romantic interests: Serenity is afraid to love. To love ad show affection, touching is neccesary. Not only does she have a spectral appearance, a single touch is all it takes for emotions to flood her. Because of this the group is careful not to touch her. The one time it happened, Serenity was almost driven insane at the emotion overload.

age: nine thousand or so

personalty: in this form she is benevolent, loving, and optimistic. she refuses to fight unless protecting her home, or her friends

romantic interest: she needs a tender lover, whether it be man or woman. A lobing hand, and a shoulder to cry on, yet someone who tells her what they want, when they want. Someone who is truthful, and unafraid to admit what they are feeling.

personality: despite her element, she is kind, Different, and judged but kind. She is battl hardened, a true warrior, and would make a good leader due to her sense of order, and her knowledge and experience a being judged, but because of her affliction, she is delegated to being the outcast of the group.

romantic interests: a rough, dominant, and greedy lover in bed, who is tender, caring, and a good listener life She longs for a man or woman that actually loves her, sees her for who she is, and one who does not judge her.

Around most people, the six guardians assume their humanlike forms, as pictured above. When alone they may keep up that pretense, but each guardian has a separate form, with other… Abilities one could say.

In her full form, the most notible change is her eyes. Instead of their normal color they turn a sort of silver, and liquid sunlight pours from them, unable to be stopped. She loses control in this form, and is unable to discern friend from foe, so she doesn’t take this form unless necessary.

In her full form, her eyes glow with moonlight, and she has full, purple, angelic wings. When in this form, she is mostly the same, but her mercy… Does not extend as far as it usually does.

In her full form she is the same. Just worse. Reckless, uncontrollable, she burns Everything in her path without a care in the world.

In this form, her powers are heightened. She is unable to even be near another person for long before their emotions overwhelm her. But, in this form, she has a humanoid solidity.

In this form… Well.. being the nature guardian, Aphrodite becomes nature. Feral nature, but nature nonetheless.

In this form she becomes the angel of death. Invulnerable, aside from one spot, which is a secret, she is a force to be rivaled

Their only inventory is their familiars

A falcon made of sunlight, Solar is the size of a small child and can heal Reyna with his sunlight.

A beautiful snow leopard, Naida has the ability to shrink, seeing as in her full size she rivals a semi truck.

A beautiful min tailed fox, Crimson is the calm to Ash’s fire

Because of her other form, Aphrodite is unable to maintain a familiar, because they fear her animal side

A wolf able to shrink, grow, and shadow travel, he balances Lunar’s sadness, as her only true friend.

Lunars only vulnerability is between her shoulder blades. Her Achilles heel…