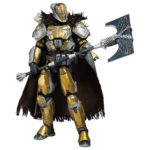 I am the former leader of an empire but stepped down and gave the throne up.

Lord Iron is a legendary hero and defender of The City with a long and respectable career. His most famous moment came during the infamous Battle of Twilight Gap when he led the City's forces to a hard-won victory over the combined forces of the Fallen Houses. Both Shaxx and Zavala were his students, but his relationship with Shaxx became strained following the battle. He later helped found the Iron Banner in honor of the original Iron Lords to seek out great champions to fight off the Darkness. He is also one of two surviving members of the original Iron Lords, the other being Efrideet.

Honour and valour are earned not taken