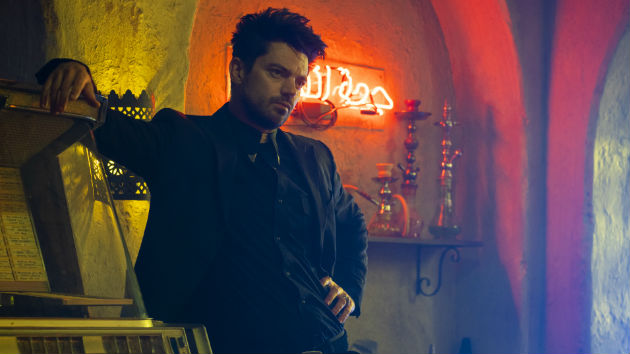 Who. Is. The. Collector?

In most cases those would make up for a being spawned from the very depths of Hell or an Angel cast down from the very Heavens themselves, or in the more logical case it would make up a unhinged amnesia patient but in this case? They are the creation of an enigma; a riddle that no one can answer because it’s question falls victim to a single factor: open interpretation.

‘Who is the Collector?’ The question, albeit simple, houses no answer for the being known as the Collector. He isn’t human nor is he a demon nor an angel, unlike most creatures that walk Earth, the Collector wasn’t born, instead he merely appeared when the first signs of life came upon the planet. The Ageless Traveler, the Duster-Clad Demon, the Right Hand of God, the Wrath of the End and the Collector. All are titles that he earned through the stories that man created. In the most basic of forms, the Collector is not that of a physical body yet at the same time he is.

His creation is something that plagues not only the people who know of him but also himself, as soon as the first creature stepped foot on the dry plains of Earth the Collector was created, born in a flash of white mist and black fire with a single mission, a single focus, a sole obsession: to collect. He was a predator through time though his prey? Wasn’t a creature, it was that of which man could not hold: their very souls and adding them to a collection that would be impossible to finish.

Over many years no one took notice of the Collector despite the fact that he appeared in numerous books, numerous pictures and numerous photos but he was merely cast aside. Many humans first thought him as just a face in the crowd, someone who was merely thrown aside, someone who was merely blurred into the background. He the face in the crowd, perfectly hidden in plain sight. How did he hide? In the most common of roles within society. He made sure he had a role that would allow him to have a grip on a small slice of power but he also made sure he was hidden, waving his hand behind the scenes and ensure that he was out of the limelight.

Servant, butler, guard, driver, barman, cleaner anything that made sure he was out of sight whilst also making sure he could know all that he needed. Why did the Collector choose the most simplistic of role? It was down to just that: simplicity. Any other role housed the chance for him to draw too much light, meaning the possibility of his work being hindered.

What is the Collector?

Not a man, not an angel, not a demon and not a god. What is he? He’s nothing more than a collector. Or that is what he states.

Now the Collector was not born but instead created, by the celestial and omnipotent beings that the Collector only refers to as the ‘Higher Powers’ or the ‘Powers that Be’. Who are they? What are they? Those two questions are ones that cannot be answered. Not by the Collector at least. They are his makers, they gave him the purpose of simply collecting souls, they are the ones who provided him with the powers that have kept him alive and well. He has often found himself pondering the question of ‘why’ but it hasn’t lingered in his mind for too long, just for the simple fact that it houses little to no importance in his eyes.

In a nutshell, the Collector is…a being that defies reality by standing within it. He houses no soul but is instead made up of a plethora of souls thanks to the wall that he collects for. With the Collector came a solid glass vessel that he has dubbed as ‘The Wall of Souls’ and his only goal -despite all the times he finds himself side tracked- is to fill the wall. It’s his only real goal in life: to eat, drink, be merry and take the souls of those who’ve been targeted for collection.